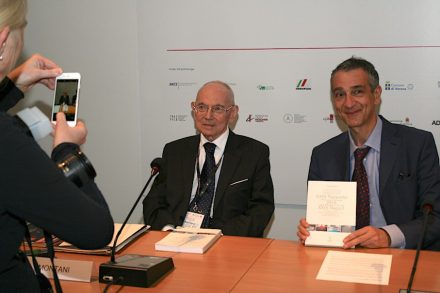 His criticism: too much waste and too little marketing / Montani recommends propagation of natural stone as a symbol of peace 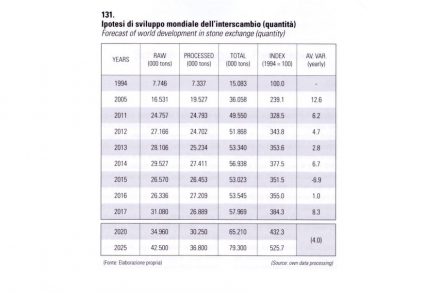 The facts and figures originate from the Statistical Yearbook „XXIV Rapporto marmo e pietre nel Mundo 2018 / XXIX marble and stones in the world report 2018“ presented by the master of numbers for the stone branch himself at Marmomac (September 26-29, 2018).

It’s the Yearbooks 29th edition and compiles some 25,000 data. Montani looks back on 3 decades of observation and development in the branch. His analysis is well founded and trustworthy, e.g., when stating that stone’s growth has exceeded that of the world economy and withstood even major crisis of the recent past better than any other branch of the market.

Natural stone is a very special material, as Montani weaves into his press conference in numerous rows of figures, only to voice sharp critique for excessive waste production and inability to recycle sufficiently.

He also never ceases to repeat that more must be done for marketing.

This year Montani even incorporated a political statement into his presentation: Military spending amounted to a turnover of 1700 billion US-$ per year as compared to some 40 billion US-$ for the natural stone branch. And despite the relatively humble contribution, the stone sector promoted word peace effectively by „propagating international cooperation“ – Montani’sw conclusion: „Since time immemorial, natural stone has been a symbol of peace.“ 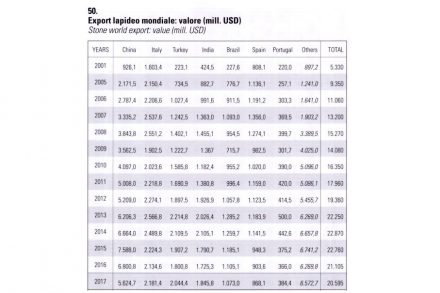 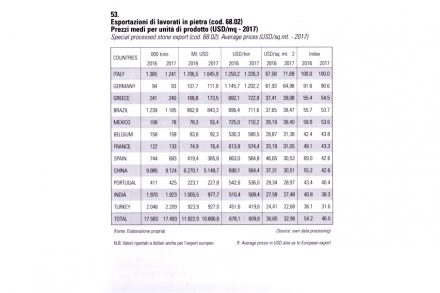 Two tables seem particularly noteworthy: one puts into perspective the role of various countries in exports (proportion of world exports by value); the other reveals the country’s roles by value per ton achieved after value added enhancement.

One more remark: since 2001 Turkey has been advancing by leaps and bounds when looking at proportion of export sales, whereas Italy has been facing protracted negative growth. But by value/t (figures from 2016 and 2017) show Italy at the tip of the pack by a long haul.

Turkey, on the other hand, finished well behind China and even behind India.

Brazil’s while defeated in total exports, valiantly held its own with regard to middle field sales prices achieved.

In general, Montani predicts that India and Turkey will close the gap to China in the coming years as far as importance on the world markets is concerned. So we have chosen to show the tables with the development of each country separately: 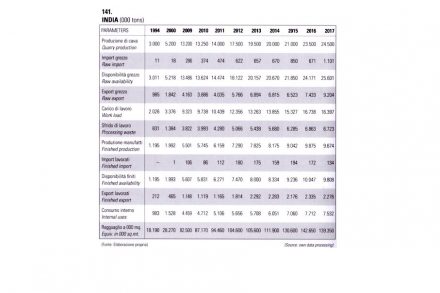 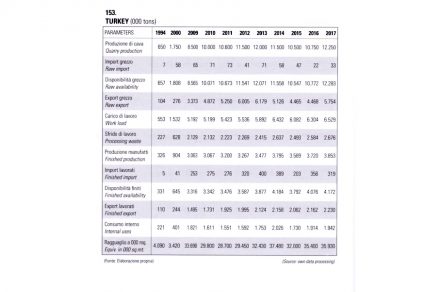 As usual, the Yearbook contains a number of tables with statistics for several countries. At the press conference Montani suggested that readers take a special look at Macedonia, Palestine, or Thailand.

At the far bottom, we show a table on world production of natural stone since 1926 – note how the distribution between limestone, silica and other types of stone has shifted since recording.

The „XXIX Rappaorto marmo e pietre nel mundo 2018 / XXIX Report Marble and Stones in the World 2018“ is available in Italian and English. It comprises 260 pages and is published by Aldus Casa di Edizioni, Carrara. 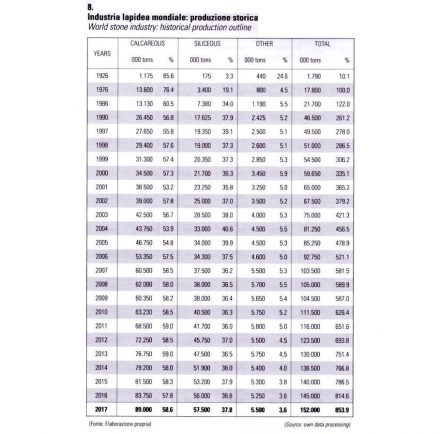