Training for tour-guides: heightening awareness for stone by means of storytelling 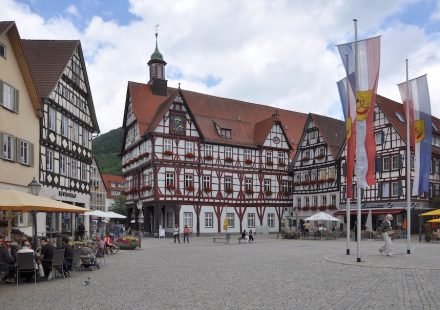 Bad Urach in Southern Germany’s Swabian Jura tour-guides are be trained in local geology. E. g. hey are telling tourists how the Church of Saint Amandus and the Fortress Dicker Turm (Fat Tower) were both build with local tufa (not to be confused with volcanic tuff) .

But they won’t be going into geological detail: unlike volcanic tuff, local tufa is a variety of limestone formed when carbonate minerals precipitate out of ambient temperature water, much like travertine.

Instead, the tour-guides will be conveying the big picture: i.e. that both sites were constructed using local stone only since transportation at the time of construction was difficult in the mountainous region at that time. Rail transportation was not yet invented, there were no rivers for transportation via waterway, and the ox cart was too costly and tedious.

The information opens a door to further questions, e.g. what the pros and cons of local limestone tufa are, its strengths and shortcomings or why does it occur in this region.

The same holds true for information revolving around the Blaubeuren Cemetery where a few sandstone headstones fall out of the norm: these originate from a distant quarry, revealing that the families buried there were well-to-do and wanted to demonstrate their wealth.

With trivia of this sort, stone gains a sense of drama and a story. The technical term is „Storytelling“. 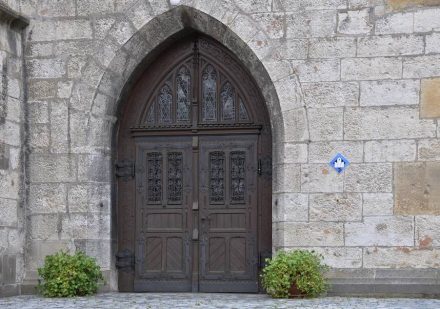 And with the aid of the story-telling spectacles, visitors suddenly see that the stone used for the fountains in the pedestrian mall is not local and they ask why that is and what material it is.

And now looking around, they also perceive that most of the stores there are not regional but originate from abroad and belong to chains selling mass-produced goods from far-away countries.

Bad Urach profits from its proximity to the UNESCO Global Geopark Swabian Alb which takes on the task of training the guides. „It was Bad Urach’s idea but there is an interest in expanding the scope of training to other cities within the Geopark“, as geologist Iris Bohnacker responsible for developing the training concept told us.

Her salient point was the discovery „that people generally have a great interest in stone“. She underscores this with the fact that youngsters and even some adults pick up stones from the ground and take them home.

However, the naked geological facts are often tedious and as in the case of limestone tufa sometimes even downright confusing.

So, Bohnacker conveys the details on limestone tufa with the aid of life cycle of stone. „Limestone tufa is ensuing as we speak: we can watch it happen, albeit in extreme slow motion“, as she describes the phenomenon occurring in the mountains as they erode and ensue anew. The guests are fascinated.

Another example of storytelling involves chert, a stone type often found in the area. Chert occurs in the form of silicified nodules in limestone, which, when broken up, form sharp edged fragments used to craft knives and spearheads in the stone-age!

Which brings Bohnacker to the flint or silex used to spark a flame. It was the beginning of modern civilization millions of years ago. The Stone age gave way to the Bronze and Iron Ages.

Training for the guides always begins with a 45-minute lecture explaining the basics of geology. Then attention turns to local material. The training culminates in a 90-minute tour of the city. 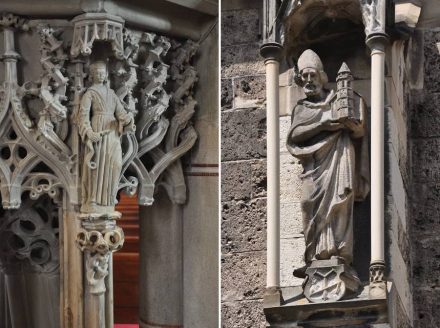 A highlight of the tour is when Bohnacker shows the grains of sand within the local sandstone: for this she whips out a magnifying glass for every participant. Even those with no prior knowledge discover hidden secrets and ask questions arising from the training.

She sums up: the object is to „foster awareness for stone“. She is not your typical instructor let alone one with attitude.

And what do the tourists think? „Well over half of them see stone through new eyes and pass on their knowledge to friends and family“, says Bohnacker. But she concedes that there are also „those who don’t care about stone when they begin the training and don’t care after the training either.“

Don’t forget: The Geopark also profits from tourists interest in stone and geology in general, which are awakened on the tours.