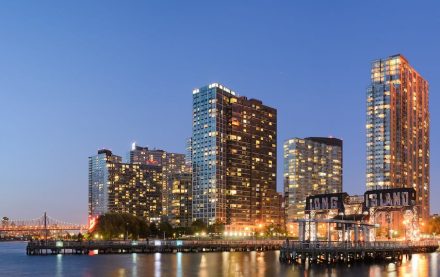 To fight climate change and to reduce New York City’s emissions of greenhouse gas, Mayor Bill de Blasio has announced to ban energetically inefficient buildings with all-glass façades. The target of this and other actions in his US-$ 14 billion Green New Deal is to „ensure a nearly 30% additional reduction in emissions by 2030“, according to the town hall’s press release about this announcement made on April 22, 2019.

„New York City is the first city in the world to require all large existing buildings of 25,000 square feet or more, of which there are 50,000 citywide, to make efficiency upgrades that lower their energy usage and emissions – or face steep penalties.

„In new construction the City will no longer allow all-glass facades unless they meet strict performance guidelines, making inefficient glass-heavy building designs a thing of the past.“

That opens new possibilities for other materials like natural stone.

One example is the recently completed 35 Hudson Yards by Skidmore, Owings and Merrill architects. The building achieved a LEED Gold-certification with prefabricated facade elements made with limestone and glass. The stone came from Bavaria in Germany and was provided by Franken-Schotter company.

Other actions to be taken in de Blasio’s „OneNYC 2050: Building a Strong and Fair City“ plan is hydro-powered city government, reducing waste and carbon-intensive consumption, solving the transportation problems and ensuring social equity and jobs, among many more.

„When added to reductions made under the prior administration, New York City will reach a total emissions reduction of 40% by 2030 and putting ourselves on track for full carbon neutrality by 2050,“ as said in the announcement.

To prepare for the effects of rising ocean waters and extreme storms, the Manhattan coastline shall get better protection.