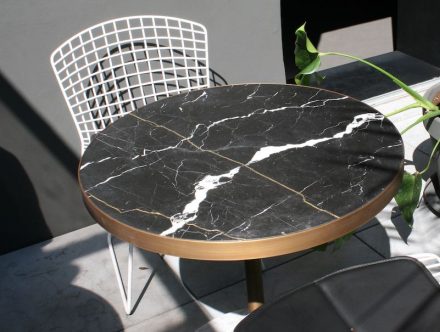 „The Lost Stones“: a brand scoops into the designer box

We recently asked what added value might look like in natural stone. A number of comments from our readers replied and more recently Salvatori Company has presented its latest project with an exclusive answer to our question.

Salvatori named its new brand „The Lost Stones“. It is a new chapter in their „Lithoverde“ series. 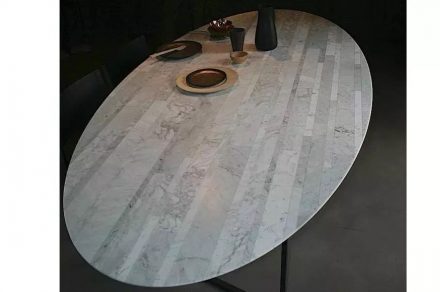 Lithoverde was originally the brand for recycled natural stone waste first introduced in 2011.

The old and the new brands are quite similar in that they use stone remnants, which are recut.

But, whereas Lithoverde uses a variety of contrasting waste pieces, Lost Stone is restricted to a single slab. The company stockroom included marble types as the were used by Mies van der Rohe in his Barcelona Pavilion, for the Notre-Dame Cathedral, or for the Basilica of San Pietro in 1500.

But glueing the pieces together is not achieved with just any resin. Salvatori uses the Japanese art of Kintsugi used to fuse and repair broken or cracked ancient ceramics. Designer Piero Lissoni was inspired by the technique.

Fundamental to the technique is keeping the crack visible once repaired, or even to accentuate it. So the breach is filled with resin containing metal dust, which might look like e.g.: gold.

The surface is then sanded and polished. The breach remains visible.

But how does this create added value?

For one, by means of the new lease on life of the stone slab.

But also with the aid of a bit of marketing on Salvatori’s behalf: The company name is twinned with the name of the designer and there is a bridge to an ancient technique adding a touch of Far East mysticism.

Also the material gains a special flair through the gilt resin. Storytelling is rich when famous buildings are mentioned.

Plus, the big picture spans across scarcity of natural resources: „Using the stone without having to resort to cutting into the mountains again“ is the theme of the company produced video.

The brand is available in a limited edition only: „After the quantity is finished, there is no more“.

So much emotion rarely comes with a product.