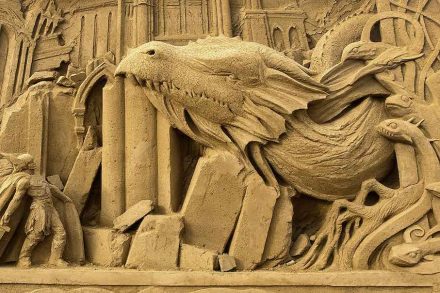 Sand sculptures are made only for a few months, yet they may reach big shapes. In the Northern hemisphere, the season has begun and on many beaches, artistic works are being created of quartz particles and water. Our photo is from the 8th festival in Hundested in Denmark which takes place until October 20. Its topic is „Masterpieces“.

Italian company De Angelis has to pay a fine of 75.000 € for illegal quarrying outside the allowed boundaries, the authorities of Massa-Carrara decided. Involved in the trouble was the Natural Park Parco dell Apuane, the portal Versilia Produce reports (Italian).

During his visit to Panama in January 2019, Pope Franics consecrated the main altar in the city’s basilica made of Carrara marble coming form Pietrasanta. In the ceremony, the Pope anointed the four corners of the altar with oil and then spread it with his hands all over the surface. A video shows the procedure (1:16:00) Part of the renovation had also been a refurbishment of the white and black marble tiles on the floor (1, video, 2).

Animum Ludendo Coles is an Italian company with a hopscotch made of natural stone. We had reported. Its new magazine may be downloaded for free; it is only in Italian but the photos give a lot of information (1, 2, 3). 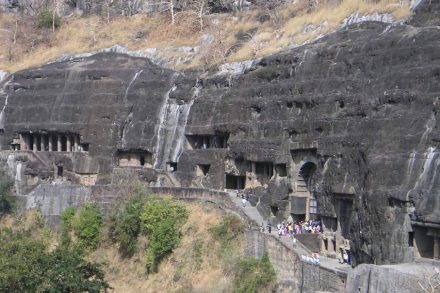 The Ajanta Caves in India’s Maharashtra state are about 30 Buddhist cave monuments and temples that date from around the 2nd century BCE to around 480 CE. They were cut into the dark basalt rock of the Deccan Traps, the remnants of an immense volcanic event some 65 million years ago. The paintings and sculpture at the site are considered masterpieces of Buddhist religious art, according to UNESCO, which gave the caves World Heritage Site status in 1983.

Turkish company Ermas Mermer produces quartz composites named Coante and uses the Breton technology. Since 8 month it operates a company in Muğla with a capacity of 800,000 m2 per year. Form there, the European and US-markets will be served.

Man dies after getting pinned under large marble slab at Cape Cod business.

Video of the month: not only the White House bears his style – Andrea Palladio’s importance for architecture all over the world is told in a cinema movie by Giacomo Gatti.