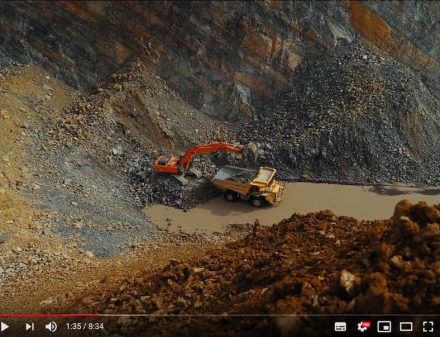 „Through limited investment quarries can play decisive roles in the conservation of endangered species“. This is a core statement of a video on the „Life in Quarries“-Project currently under way in the Belgian Region of Wallonia. With the aid of EU-subsidies, stone and gravel producers, conservationists, and scientists have joined forces in gathering practical experience on just that. Minerals should not only be mined in an eco-friendly way but rather promote ecological promulgation.

The project was set on course in 2015 and will continue until 2020 but first results are already reported on the webpage.

In short: The results are perhaps not spectacular. But that should come as no surprise. The animals whose habitat is being nurtured by the project are for the most part small and inconspicuous. „Sand martins, lizards, natterjack toads, or typical algae“ are all in danger of disappearing because their habitat is being systematically decimated.

Among the recommended conservation methods: for toads a puddle in a track in spring and summer is often sufficient for spawning. So if the quarry owner scratches a trough with his bulldozer shovel a pool will soon appear where animals will gather, and plants will flourish.

So the important point is to ensure that flora and fauna are left undisturbed.

No need to erect high fences. A row of rocks as a barrier is quite sufficient to keep out unwanted visitors according to the video.

The same holds true for rubble stock. The rubble can be piled aside and left to its own devices.
The project is meant to converge various means within „dynamic biodiversity management“. 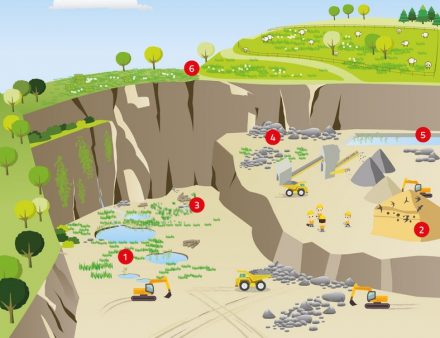 Management itself is also not meant to be spectacular: should a protected area be called back into production, a new zone can receive a head start by replanting from the old sanctuary to the new.

In short, it boils down to mindfulness and care for living beings around us.

Of course quarry staff plays a key role in realization. During the first 2 years of the new project 56 members of staff participated in further education. „Biodiversity promoters are now present by 49 sites“, this was the tally in 2015.

But how to entice animals or get plants to relocate? As a rule this is a natural process as nature provides numerous free rides for propagation, i.e. wind, feathers of waterfowl, or even creeks or rivers overflowing their embankments during flooding. Chance immigration becomes permanent resettlement if the guest finds favorable conditions.

„Stepstones“ are also an important element within the protected quarry. These are small watering holes with scrub or undergrowth to help animals along their journey.

The „Life in Quarries“-Project works on a budget of 5 million € of which 56% are provided by the EU, 21% by companies, 20% by the region of Wallonia and 3% by the partners. Liège-Gemblous University and the regional ecological organization Natagora are also involved.