Painted pebbles: taking a stone home, painting it and then leaving it again for others as a friendly greeting 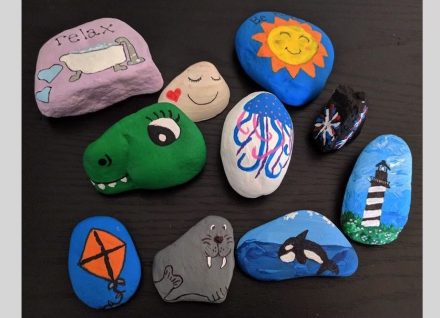 „Rocking“ is a new attitude on its way across the world

„The whole family is united around the table painting stones“, is said in a TV-report from Germany. The trend of „rocking“, i.e. lifting a pebble, taking it home, painting it and leaving it again for others, has now also arrived on the European continent. Important: always post a photo on Facebook!

Many newspapers have reported about this attitude presuming that the idea was born in England or the U.S. Some understand it as something like hugging on the street – just doing something easy and without big expenditure as a friendly greeting to somebody else not personally known.

The Guardian from London already had an eye on this phenomenon and mentioned the „Kindness Rocks Project“.

We found a webpage informing about the „International Drop a Rock Day“ to be held on July 3rd.

Sources say that in other places „rocking“ has already been banned as in several parks in New Zealand.

Newspapers in Germany discuss the etiquette of painting pebbles: the little artworks may be deposited anywhere but must not disturb other people or cause damage; only water-soluble lacquer should be used, a cover with clear varnish might be good protection.

For simpler standards, marker pens also do good service, journalists have found out.

The above mentioned TV-report asserts that people walking their dogs now come home with trouser pockets full of stones. We ask if the pets, in turn, are wondering why mum (or dad) now has her eyes on the ground but still does not go to the bottom of things with her nose.

„You do not find only stones, but you also make friends,“ is said in the TV-report.