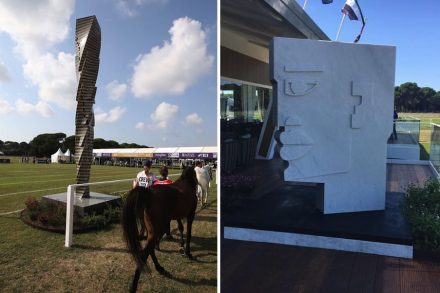 Toscana Endurance Lifestyle 2019 will be adorned by stone sculptures provided by Italian Henraux company. Among the visitors of the horse race held at the San Rossore racetrack near Pisa in September were Sheikh Mohammed Bin Rashid Al Maktoum, vice president and prime minister of the United Arab Emirates alongside the governor of Dubai, the Crown Prince of Dubai Sheikh Hamdan bin Mohammed Bin Rashid Al Maktoum, as said in a press release by Henraux. We show one work by sculptors Park Eun Sun (left) and one by Steve Tepas (1, 2).

A „Healing Garden“ to honor the 12 victims of the Borderline mass shooting in Thousand Oaks, CA will soon be completed. There will be 12 large natural stone-slab benches along the plaza made of granite to illustrate the strength of the community, the Daily Bulletin reports.

Chinese company Buzao has a process to give natural stones a new color. In 2013, we had reported about Brazilian firm Brasigran and their „Arcobaleno“ (Rainbow) collection with colored stones (1, 2).

Wildfires in Eastern Bolivia near the town of Robore may have damaged or even destroyed rock art sites that date back to 1500 BC.

In the „Collages for the Esplanade Apartments“, artist Assaf Evron has applied images of a rock formations to the glass façade of a building in Chicago. The work was inspired by a collage of Mies van der Rohe from the 1950s.

Spanish Grupo Cosentino has opened a new Logistic center with a showroom with 2700 m² in Neuhaus in Swiss canton San Galo. The company is the producer of artificial stones like Silestone or Dekton (Spanish).

Land use by early farmers, pastoralists and even hunter-gatherer societies was extensive enough to have created significant global landcover change by 3000 to 4000 years ago. This is much earlier than has been recognized, and challenges prevailing opinions concerning a mid-20th century start date for the Anthropocene.

Video of the Month: Alabama Public Television is producing a series of videos titled „Alabama Legacy Moments” that offer a quick history of the people, places and stories that have defined the state, among them Sylacauga marble quarried since 1830.