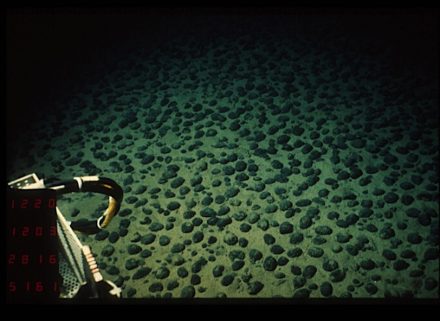 Rare metallic elements found in clumps on the deep-ocean floor mysteriously remain uncovered despite the shifting sands and sediment many leagues under the sea. Scientists now think they know why, and it could have important implications for mining these metals while preserving the strange fauna at the bottom of the ocean.

The growth of these deep-sea nodules – metallic lumps of manganese, iron, and other metals found in all the major ocean basins – is one of the slowest known geological processes. These ringed concretions, which are potential sources of rare-earth and other critical elements, grow on average just 10 to 20 mm every million years.

Yet in one of earth science’s most enduring mysteries, they somehow manage to avoid being buried by sediment despite their locations in areas where clay accumulates at least 100 times faster than the nodules grow.

A study shows that the nodules are strongly associated with seafloor fauna. „Organisms such as starfish, octopods and mollusks seem to keep the nodules at the seafloor surface by foraging, burrowing and ingesting sediment on and around them,“ said lead author of the study Dr. Adriana Dutkiewicz, an ARC Future Fellow in the School of Geosciences at The University of Sydney. „Although these organisms occur in relatively low concentrations on the abyssal seafloor, they are still abundant enough to locally affect sediment accumulation.”

These species feed on the permanent „rain” coming down from the surface of the water bringing with nutrients or only sand. 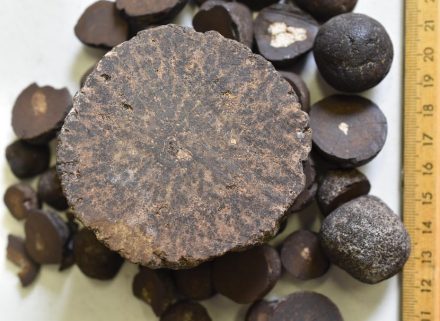 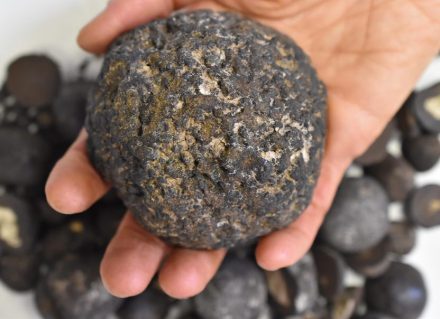 This insight is supported by direct seafloor observations of nodule fields by independent studies. „Our conclusion is that deep-sea ecosystems and nodules are inextricably connected,” Dutkiewicz said.

The study results also suggest that the regions where nodules are most likely to occur are more extensive than what has previously been assumed and include vast areas that are yet to be explored – findings with important industrial as well as conservation implications. „Our map highlights regions that may be important economically,” Dr. Dutkiewicz said, „but at the same time draws attention to areas of the seafloor that may be hotspots for diverse deep-sea organisms that we know little about.”

Rare-earth and other critical elements are essential for the development of technologies needed for low-carbon economies. They will play an increasingly important role in next-generation solar cells, efficient wind turbines, and rechargeable batteries that will power the renewables revolution.

The study results are published in the „Geology“ magazine.

Animation: Rotating virtual globe showing predicted probability of nodule occurrence with warm colors indicating high, and cold colors low probability, based on a programming by Xiaodong Qin from the School of Geosciences, The University of Sydney.