„Vortice” by antoniolupi and Paolo Ulian: freestanding washbasin as a symbol for the flow of water 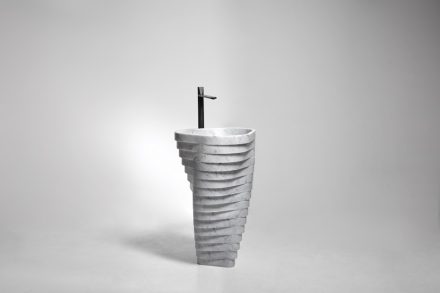 „Vortice” (Vortex) is the name of the latest sink from the Italian company antoniolupi. It can be interpreted as a Functional Sculpture – a piece of furniture that can be used as such, but whose form unmistakably claims to be a work of art.

We recently discussed some aspects of this line of thought in product design with natural stone.

The material of choice for Vortice was Carrara Marble and the designer was Paolo Ulian. He has taken the shape of his „Intreccio” washbasin introduced in 2018 one step further: whereas in the past the stone was merely stacked one slab on the next, in staggered layers, the stack now has a twist and is tapered from top to bottom: Like a whirlpool we all know from letting the water out of the bathtub, the foot of the free-standing basin is narrow at the bottom and widens toward the top like a funnel with a sinkhole in the middle. 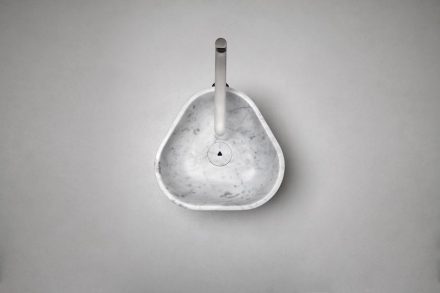 This type of design would also avoid waste, according to the press release. The object is cut from a single cube of marble by cutting it into 16 slices. 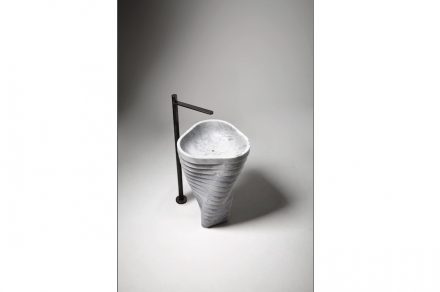 The press release continues: Vortice deepens Paolo Ulian’s „theme of contemporary matter, to investigate the complex dialogue between immobility and dynamism, between solidity and lightness, between reality and appearance.” 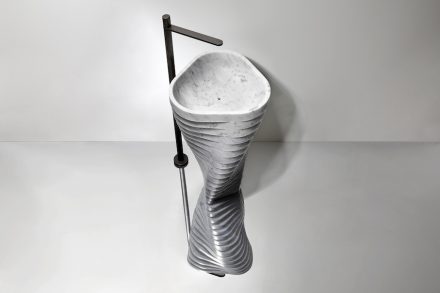