Coronavirus: the mostly small companies of the stone sector have largely mastered the crisis so far 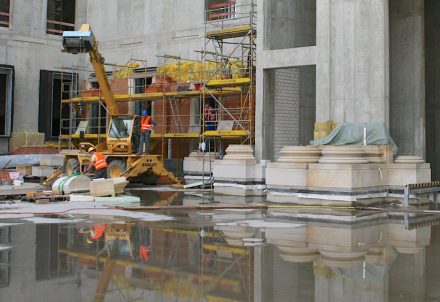 The coronavirus moves on across the glone from continent to continent. In the meantime, it has arrived in the United States, and it is now also returning to China where the government has just issued a mandatory quarantine for all travelers from abroad.

While the effects in everyday life are dramatic, they seem to have been kept within limits for the mostly small companies in the natural stone sector.

First of all, a snapshot of everyday life in affected countries, here Italy’s Lombardy which is a center of the crisis: In a video, a citizen compares the number of obituaries in the newspaper from February 9, 2020, to those from March 13, 2020 – first one and a half pages, a month later ten! When photos of the deceased are printed in the daily newspaper they show elderly people.

One should imagine such a morning reading when the state of emergency is declared and an ambulance with a siren drives by.

Francesco Grassi from Grassi Pietre company, not too far away in Vicenza, does not sound in panic, though worried. The company continues to operate both its quarry and its processing, he says. Because the firm has its own materials and large stock, it has so far been no problem to supply the customers.

However, shipping is becoming the bottleneck, because the countries in Europe have closed their borders. In so far, Francesco Grassi expects that the problems have only just began, but could become even more serious if construction sites will be closed.

In our research by telephone and mail, he heard the same from other European countries: quarries and processing continue working, albeit with reduced production, and the material is still being used, as long as it can be taken to the construction site.

Gerd Merke, Secretary-General of Euroroc, looks beyond the countries’ borders and points out that a lack of workers is one more problem: many had returned home at the beginning of the crisis and are now not allowed to cross the border again.

Spain, like Italy, is particularly hard hit by the coronavirus. We spoke to Francisco („Paco”) Castelló Santo from Bateig company. He also restructured production so that fewer people are at the plant at the same time. Home office is in the office and in the sales department.

Also for him, shipping is the crucial problem, at the moment, even more so because the price per container has now risen by 20-30%. Many customers are facing problems to calculate this and therefore prefer to postpone deliveries until later, he says.

Until now, the impact of corona on the supplier countries had not been so hard, according to him: as the first months of the crises in China were coinciding with the New Year festivities there, the halt of the Chinese economy cuased by the virus was not felt so strong.

And now, Asian populations are again struggling hard to „show the world that even a strong crisis cannot stop them”, he says.

The first slumps in the USA are already being felt by Bateig. But since the company’s business there is mainly projects the negative impact might not be too strong.

During our research, it became clear that the sector companies have adapted themselves very quickly to the crises. Out of nowhere they suddenly do home office and even can do it. The press releases from companies such as the Biesse Group, Breton or Fila show that digitally they want to maintain both sales and customer service.

Overall, the companies in the stone sector that we contacted seem to accept the measures taken by their governments.

As a preview, Francesco Grassi hopes that „things will restart in June this year”. But he assumes that Corona will leave its marks: „After 2020, economy and life in general will be different.”

Finally: also pleasant gestures from the stone sector and or related industries have to ne noted: Neolith, manufacturer of engineered stone based in Almazora, Spain, donated € 300,000 to support 3 hospitals in the province of Castellón; Francesco Grassi thanks „the many customers” who sent him face masks to distribute in Italy.

The peak of corona cases has yet not been reached in Italy and all over Europe, but further West the problem has only just arrived.