The Ambedkar Memorial Park in Uttar Pradesh, India, is a stone desert and an example of how the wrong use of natural stone can have an impact 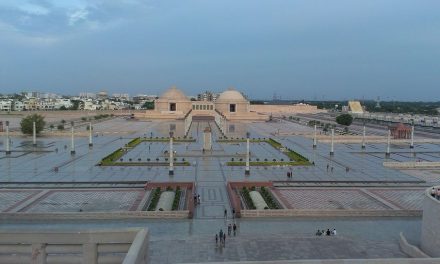 In the summer months, the plant is an incandescent furnace, among other things because there is too much dark sandstone and greyish granite, which heat up in the sun / Counter example Taj Mahal

In the Indian state of Uttar Pradesh lies the Ambedkar Memorial Park, a huge complex in memory of Dr. Bhimrao Ambedkar, who is often called the „Father of the Indian Constitution”. When you enter the 107 acres (433,000 m²) site in summer, it takes your breath away: the temperatures are like in a furnace, and this is mainly due to the red sandstone and the greyish granite, which were used in huge quantities for the flooring, staircases, several statues and monumental buildings. Admittedly, the city of Lucknow in the federal state of Uttar Pradesh is already extremely hot, which is why winter is recommended as a travel season.

The site is another example of how natural stone is used without regard to the properties of the material.

For example, if one had used light and polished marble like the Taj Mahal, the extreme blazing heat would not exist. (Of course marble would not be an approriate material for such a high traffic area.) 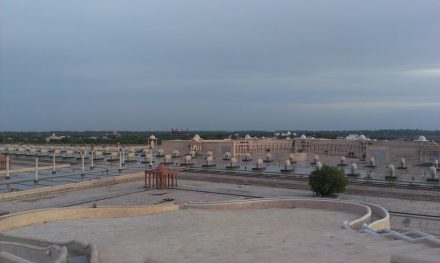 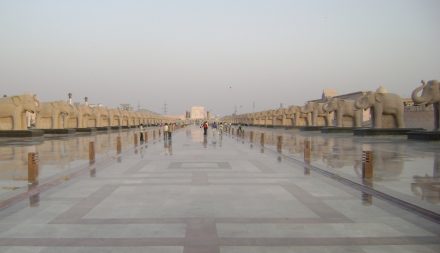 We know from the basics of physics: the darker the colour of a material, the more heat radiation it absorbs. The radiation comes from the sun and is invisible.

The nature of the surface also plays a role here: if it is polished, i.e. mirrored, so to speak, the heat rays are reflected.

There are no shadows anywhere.

Yet stone actually has excellent temperature properties, which have been used in the architecture of hot countries since time immemorial. There, polished white marble (just as light limestone) is a popular material: even outside in the heat, the stone always feels cool. This is because our body temperature is 38 degrees, but the stone hardly ever reaches this temperature – if you touch it, it withdraws heat from the skin, giving us the feeling of pleasant cooling.

The reason for this effect is that stone is a good heat conductor due to its compact structure.

Natural stone also has a very good storage capacity for cold or heat. This is why it is a preferred material for stoves and underfloor heating, for example. In Ambedkar Memorial Park you can feel this in the cool night hours when the heat radiation released by the stones reaches the skin as pure heat. 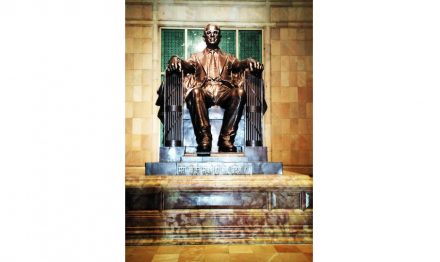 These properties of the stone are used all over the world, for example in curtain walls. There the stone acts as a temperature buffer in front of the insulation layer behind it and the actual masonry.

Back to Ambedkar Memorial Park. There has been and is a lot of discussion for political reasons about the facility, which was completed in 2008 at a total cost of 7 billion rupees (about 95 million US dollars): there is a long row of monumental elephants in the entrance area – the animal is the symbol of the Bahujan Samaj Party (BSP). An important politician from their ranks, Mayawati Kumari, had the colossuses set up there.

In connection with the park she is accused of using Ambedkar for the popularity for her party and to secure votes.

Ambedkar came from the caste of the untouchables, but achieved the impossible and worked his way up to a university place. Later, he was instrumental in the country’s constitution, which formulates the equality of all citizens. Compared to Mahatma Gandhi, he is little known abroad.