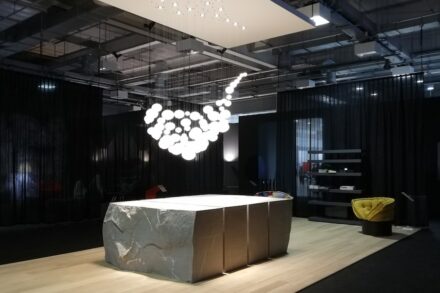 “Mont” was the name of the reception counter made of Pietra Piasentina limestone that the company Julia Marmi presented and used on its stand at the Cersaie fair last year. At that time, we had reported on the company’s tiles in the design of human chromosome 22 (“Genome”), so here we are now catching up on “Mont”.

The designer Davide Vercelli has played with the theme of a massive block of stone that is still partially unhewn. Of course, the reception counter at the Cersaie was not made of solid stone, but was only covered with a crust as front, flamed sides and a top plate. 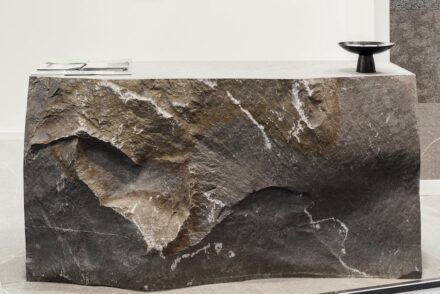 This is a familiar idea. Vercelli, however, has tought it further and turned the reception counter into a long table, where middle sections can be inserted. This object, also called “Mont”, also looks solid, precisely because the end pieces look solid and because only from close up can you see into the joints between the middle sections. 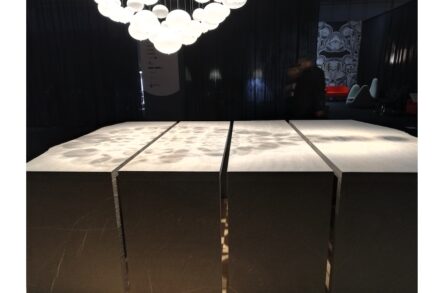 The individual parts are glued together. This can also be done on site. The end piece weighs about 700 kg, a middle part about 360 kg. 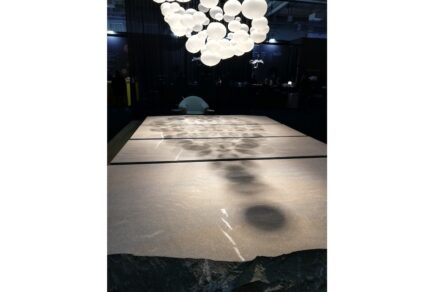 For insiders, the name “Mont” has a message: in the dialect spoken in the historic Friuli region between Venice and the border with present-day Slovenia, the word means “mountain” in the female version, and in the male version “world” – the company and the designer wanted to express that their Pietra Piasentina means both home and the wide world to them.

The limestone is mined only in a narrow area of the mountain range that continues northwards into the Alps. The stone has been used for a long time in construction or for decorative elements. The name Pietra Piasentina refers to the ancient expression “Una pietra che la piase” (A stone that you like).

The name of the company, founded in 1967 and based in the town of Cividale del Friuli, has a different reference: it recalls the founder’s military days with the mountain hunters who had a division called “Julia” in the town of Udine. The soldiers are traditionally involved in various social projects.

The company is a member of the Consorzio Produttori Pietra Piasentina, founded in 1965 to protect the brand and market it worldwide.