Italy’s stone and technology exports dropped by (-)25% in the first half of 2020, but June brought a partial recovery 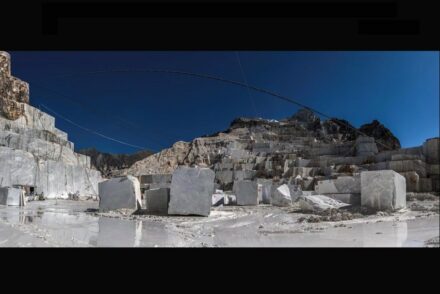 A tough first six months for Italian stone sector exports in 2020, with a decided downturn in foreign sales of stone materials (-24.5%) and of machinery and complementary equipment (-26%) compared to the same period in the year before. There was an encouraging trend reversal in June, but a situation of uncertainty remains. “An unprecedented situation, urgent intervention is needed to sustain exports and reboot the domestic market,” Flavio Marabelli, Honorary President of Confindustria Marmomacchine commented at the General Assembly of the trade organization held in September 2020 in Milan.

As amply predicted, the Covid-19 emergency that joined an already unfavorable global economic picture in the first half of 2020 saw a sharp drop in exports for the Italian stone/techno-stone industry, which encompasses both materials and stone-working technologies. According to official statistics processed by the Confindustria Marmomacchine Studies Center, in the first six months of the year, Italian stone companies’ foreign sales in fact dropped by 25%, from 1.405 to 1.053 million euros.

We remind readers that the Italian stone/techno-stone sector has more than 3,200 companies and some 34,000 employees, with 2019 revenue of nearly 3.9 billion euros, exports worth 2.9 billion, a heavy propensity to export (which reached 73.9% of the value of output) and above all an annual trade balance of more than 2.5 billion – around 5% of Italy’s overall trade balance.

Flavio Marabelli: “The first signs of an uptake came only in June, when sales of both finished stone materials and of stone technologies showed an encouraging trend reversal, getting close to monthly pre-Covid levels. On the other hand, exports of raw materials continue to do badly. Whether data for June showed the start of an effective rebound will be known only in the second half of the year, although it will be hard to compensate for the losses in the first part of the year and return to 2019 amounts”.

“What our sector urgently asks from the government,” Marabelli pointed out, “are targeted actions that enable our companies first and foremost to be able to travel to and sell on foreign markets – immediately applying the Export Pact – as well as to give greater support to domestic demand, making structural the Enterprise/4.0 Transition Plan incentives, strengthening the New Sabatini law and fostering the greater use of natural stone in building, for example by broadening possible interventions covered by the 110% Superbonus”. 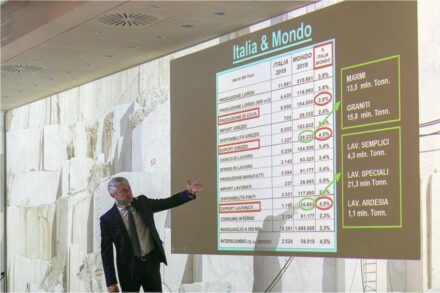 Regarding the stone materials sector, which had closed 2019 with a 5.3% decrease in exports, 2020 began with a further decline in foreign sales of Italian marbles, granites and other natural stones. According to data processed by the Confindustria Marmomacchine Studies Center, in the first half of the year Italy’s exports of ornamental stones fell in value by 24.5% from the same period the previous year, halting at 658.3 million euros.

To date, the highest price was paid by the raw product component, whose exports plummeted by 43.5% (to 119.9 million euros) mainly due to the heavy drop (-51.1%) in orders from China – the top importer of blocks from Italy, with around a 50% share – where processing had halted as early as February. Relatively smaller was the decrease in exports of finished and semi-finished stone products (-18.4% for 538.5 million), which had actually ended the first quarter with slight growth (+0.6%) since the lockdown in Italy and its main trading partners began later, in mid-March.

As concerned the stone technology sector, data from the association’s studies center for the first six months of the year showed a definite downturn in Italy’s exports of machines, installations, equipment, tools and consumables for quarrying and processing ornamental stones, with a loss of 26% from the first half of the previous year (from 533 to 394.4 million euros). In a context of general construction sector slowdown worldwide, and in the stone sector in particular, the uncertainties tied to the spread of the Covid-19 pandemic and subsequent containment measures put in place by most countries put a further brake on technology investments by stone companies globally.

In fact, while the drop in the first quarter was limited (-8%), in April – when production was halted in Italy and most countries in the world – there was a real collapse in Italy’s exports of stone-working technology (-80.3% from the same period in 2019), which continued less intensely in May and showed an upturn only in June.

Analyzing the main destination markets, outstanding was Egypt’s leap (to 76 million euros), becoming the top purchaser and surpassing the United States (47.6 million), whose imports of Italian stone technology in the first six months of the year dropped by 23.6%. Sales to Spain grew by 9.3%, making it the third buyer with 38 million) and France, the fifth buyer was up 1.1% to 14.7 million, while there were big drops in Germany (-57.7%, fourth buyer, to 16.2 million) and Portugal (-57.4%, seventh buyer, to 13.1 million). Among the top ten purchasers there was an encouraging increase in sales to Russia (+50%, sixth buyer, to 13.2 million) and Turkey (+124.1%, ninth buyer, to 11 million).