Aga Khan Award for Architecture 2019: one of the winners was the Irish firm Heneghan Peng Architects for the new Palestinian Museum on the West Bank 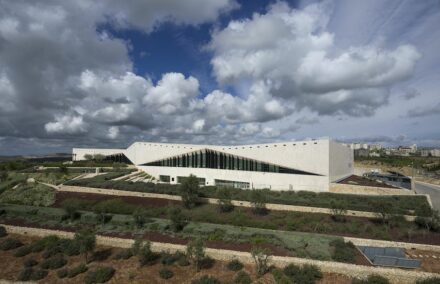 In 2019, the Aga Khan Award for Architecture was awarded to the new Palestinian Museum in the village of Bir Zeit on the West Bank not far from Ramallah. The prize is awarded every 3 years and honors not only the design achievement but also the positive effect of a building on the cultural and social needs of the people in the area.

The architecture came from the Irish firm Heneghan Peng Architects. It received prize money in the amount of US-$ 16,000. The client was the NGO Taawon-Welfare Association, which supports people in the West Bank and Gaza Strip and refugees in camps in Lebanon.

The museum aims to promote the Palestinian heritage and “foster a culture of dialogue and tolerance,” as the Aga Khan Development Network writes on its website.

The architects were inspired for this approach especially by the local cultural landscape. “Every element of it has been touched and tells a story of intervention, production, culture, environment and commerce“, the architects write and go on to say: it “has the ‘worked’ quality of a city“. 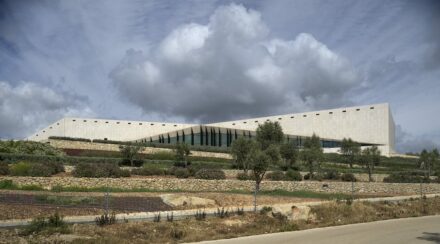 Especially the terraces all along the slopes have impressed the architects. For generations, people have piled up the stones to form dry stone cowering places and used the resulting land for agriculture.

The museum itself is located on a hill with a magnificent view. On the slopes, the Jordanian landscape architect Lara Zureikat had these terraces rebuilt or restored according to the ancient models. Reading the list of what is now being planted there, you can hear the enthusiasm of the planners. „Groves of olives, pomegranate, fig, apricot, almond, carob and walnut are already yielding fruit and nuts, below them a thick, aromatic carpet of wheat, chickpea, mint, za’atar, sage, chamomile, jasmine and lavender bloom.”

In fact, the Levant, another name for the region in ancient times, was a veritable Garden of Eden when the climate there was not as dry as it is today. Recently, researchers have discovered that much earlier than 100,000 years ago, when the first humans set out from Africa to Eurasia, the fertile land served as a catapult to the north. 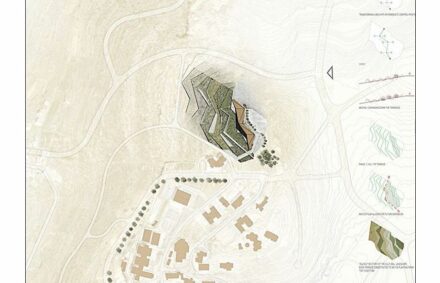 The museum itself also picks up on the terraces: from a bird’s-eye view, one can see its zigzag shape, which continues in the angular floors on the slope. 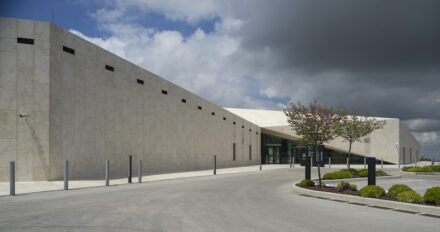 The façade is clad with limestone slabs. The top layer of the roof also bears the stone, which comes from a quarry near Bethlehem and was once the dominant building material in the region. The joints between the slabs on the façade are open and clearly visible.

One of the special features of the construction again stems from the region: the probability of earthquakes is high here, as two earth plates collide along the Jordan Valley.

The stone slabs on the façade are attached to the concrete body with special rails. Parts of this concrete structure are supported in such a way that they can move independently of each other in case of earth tremors. The French engineering company T/E/S/S acted as consultant for the façade.

Elongated triangles are the most important shapes in the façade, for example in the case of the large glass front. Dark metal swords are placed in front of the panes, which serve as sun protection, among other things.

A basement has been created at that point in the building ground where there was a natural depression. In front of the window there is a kind of amphitheater, which merges into the garden behind it. Close to the museum building, the planting is very correct; downhill and with increasing distance to the building, the planting intentionally goes wild. 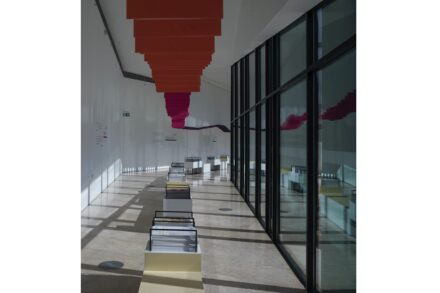 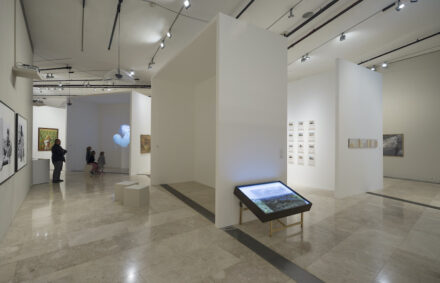 The building has achieved the LEED Gold environmental certificate, among other things for its thermal insulation measures as well as its rainwater and wastewater management.

The Aga Khan Award has been presented since 1977 and has a total prize money of US$1 million. Projects from all over the world can apply, provided that Muslims played an important role in them and that they are important for the Muslim world. The main focus is on economic and social development. Not only architects can apply, but also communities, developers, engineers, and artists.