Despite Covid-19: a (virtual) visit to Tullio Lombardo’s “Adam“ in New York City 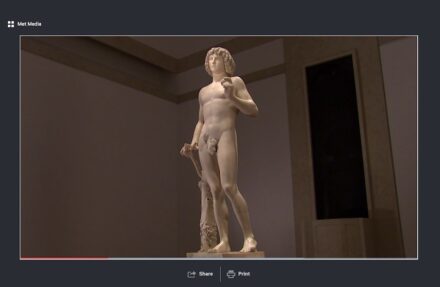 The sculpture, created around 1490 and depicting the first man created in God’s image as the Bible says, had fallen from its base in 2002. A Museum guard found it shattered into 28 large and countless small pieces after closing time on the 20th of October that year. The plywood base had buckled under the marble weight of half a ton.

The restoration took 12 years and included a detailed analysis of the sculpture’s structure with most modern methods. On the occasion of the completion and an exhibition documenting the restoration steps in July 2015, we had described the project.

The artist, Tullio Lombardo (ca. 1455-1532), originated from a famous family of Renaissance sculptors and architects in Northern Italy. He created his Adam for the tomb of Andrea Vendramin, Doge of Venice. It was a milestone nude figure long after Classical Antiquity but in the same style and held in awe by no lesser than Michelangelo and Canova, who followed later.

Art history reveals that Adam, though created after the image of God and carved as a copy of the Classical Antique show-of-strength, what with the apple of the Garden of Eden in hand was nevertheless depicted in an insecure pose holding tight to a twig. Leaning on the tree of knowledge, he appears not only physically but also symbolically somewhat unstable: knowledge, after all, always goes hand in hand with doubt.

For the time being, entry to the museum is by timed ticket or reservation only, and capacity is limited.