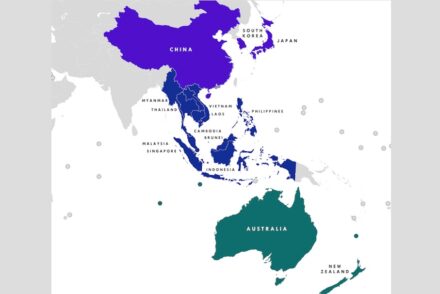 The new free trade zone in the Far East called RCEP (Regional Comprehensive Economic Partnership) will have a major impact on the natural stone industry worldwide. For the 15 signatories to the agreement, import duties on finished stone products will be abolished in the future. This also means: without the customs duties, China will become a new destination country for such products and the previous most important buyer, the USA, will lose importance.

It is predictable that even suppliers of such end products from outside the RCEP – the southern European countries and Turkey – will make detours to the free trade zone in order to bring their products duty-free to China or other markets there.

With the RCEP agreement, the largest free trade zone in the world was be created with, according to Wikipedia, 2.2 billion people (European Union after Brexit: 380 million; USA: 328 million). The agreement was signed on November 15, 2020. It concerns the entire Far East and Pacific region, where the economies of some countries have annual growth rates of 5% and more. RCEP members are China, Japan, South Korea, Australia, New Zealand and the 10 ASEAN countries (Brunei, Cambodia, Indonesia, Laos, Malaysia, Myanmar, Philippines, Singapore, Thailand, Vietnam).

India withdrew from the negotiations in 2019 because it feared disadvantages for individual sectors of its economy.

The RCEP reinforces a trend that Dr. Carlo Montani points out in his current statistics yearbook “XXXI Rapparto marmo e pietre nel mondo 2020 / XXXI Report marble and stones in the world 2020”: as far as the extraction of natural stone is concerned, 56% of world production now comes from the Asian continent, and that from 3 countries, namely India, China and Turkey.

Above all, the RCEP will also be important for natural stone end products. The China Stone Material Association (CSMA) wrote to us at our request for an evaluation of the free trade zone: “China will import more semifinished and finished stone products from RCEP countries.”“

An indication of China’s interest in importing finished products was recently given by the CSMA president in an interview: “China will import more semi-finished and finished stone products from RCEP countries. “Consumption upgrading (in China) brings strong demand for imported goods.“

But the RCEP will also have an impact on the world market for natural stone technology: “China’s investment in ASEAN countries will increase significantly and as well as the export of China’s stone equipment,“ the association says. 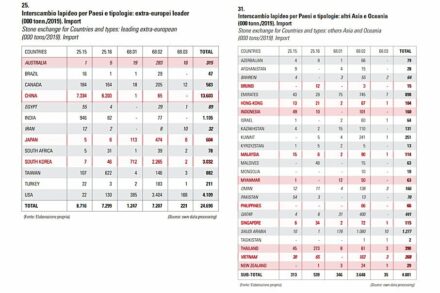 Turkey seems to be particularly well positioned as regards access to the RCEP area for external suppliers. Its association IMIB had made great efforts in recent years with government support to set up its own natural stone trade fairs (with international participation) in Fernorst. Although the Singapore Stone Show was a flop, the Jakarta Stone Fair, which is to be held for the 3rd time in 2021, is a success. Indonesia, with over 200 million citizens one of the largest Muslim states in the world, is considered the hotspot of economic growth in the region.

The major players in the free trade zone are Australia, South Korea, Japan and China. In South Korea and Japan, China has a firm grip on the natural stone market as a supplier. National extraction is comparatively low there.

Vietnam, however, is considered an up-and-coming newcomer both in terms of its own production and imports. The second major Turkish association, the Aegean Minerals and Natural Stones Exporters Association (EMIB), has already made contacts. These days, a “Digital Natural Stone Trade Delegation“ was sent there. “The Vietnamese natural stone market is expected to grow by 10 % in the coming years,“ is said in a press release.

New Zealand has so far only a low consumption of natural stone.

It is also worth mentioning in this connection that the European Union concluded a free trade agreement with Vietnam in June 2020. Italy’s natural stone association Confindustria Marmomacchine has already established contacts there.

Statement of the ASEAN states on the new free trade zone

Full Text of the Agreement 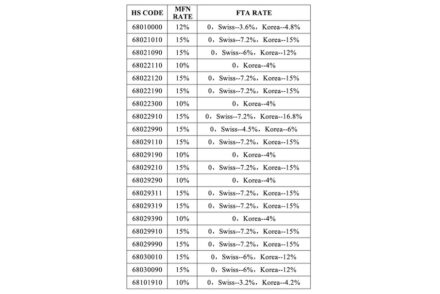