On our list for the time after Covid-19 (and after Donald Trump): the Capitol in Washington, DC 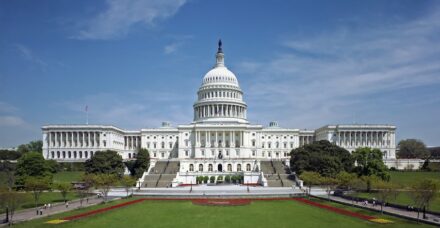 In this issue of our series “On our list for the time after Corona“ we had planned to virtually visit the Fountain of the Four Rivers in Rome created by Gianlorenzo Bernini (also: Giovanni Bernini). Due to current events, we made the Capitol building in Washington DC the topic:

The founders of the American Nation had brought from Europe their admiration for the Greek democracy and the Roman republic and also for the stones from the official buildings in Athens or Rome.

But when the Capitol was erected, there were no marble deposits in proximity and so the Aquia Creek sandstone from nearby had to be used for the cladding and for interior features.

At that time, it was dubbed “freestone“ due to the official role it played, so to say. Yet it weathered poorly and had not the best quality due to flaws.

But by 1816, marble was quarried at the upper Potomac River and brought to the building site on Capitol Hill.

“Nearly a dozen states have provided marble to help build the Capitol Building,“ is said on the governmental webpage Architect of the Capitol, “it is used in floors, baseboards, stairs, railings, door frames, wall panels, mantels, columns, and cornices. Marble from Massachusetts forms the exteriors of the mid-19th century House and Senate extensions, and Georgia marble clads the East Front connecting corridors.

“Elsewhere within Capitol Hill, all of the principal congressional office buildings are faced with marble, as are the Library of Congress John Adams and James Madison Memorial Buildings, and marble floors, stairways, walls, columns, and sculpture enrich many interior spaces.“

With international trade and transportation by steamboats, also stone from Italy became available for reasonable prices. “Many of the statues in the U.S. Capitol are carved from the fine, white marble quarried near Carrara, Italy, which has been favored by sculptors for centuries,“ the webpage continues.

Architect of the Capitol