News from the Calçada Portuguesa: a book shows art with the individual stones and a film gives a bird’s eye view of the paved squares in Lisbon 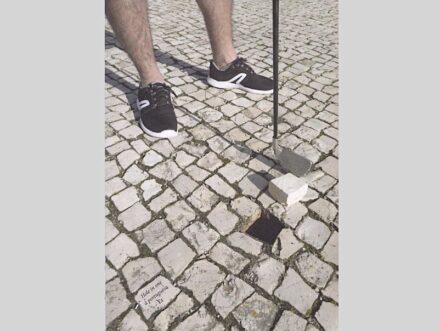 The famous Portuguese pavement, Calçada Portuguesa in the national language, probably dates back to the years around 1845 in Lisbon. Since then, the patterns mostly made of light limestone and dark basalt have spread all over the world, especially, of course, in the area of Lusophonia, that is, the Portuguese culture from Portugal to Brazil and Angola to Macau.

But finally, there is something new to report on the subject, and it comes from Ernesto Matos, who has already described the history of this cultural asset in numerous books and documented countless examples from all over the world with photos: in his latest book, however, Matos does not look at the complete patterns, but at the individual small stones.

And because Matos is Matos, he does so artistically, under his pen name “Er,“ which refers to Plato, and in his self-published “Mythus de Er“.

“In Excelsis Petris“ is the title of the book. By focusing on the little stones as such, he wants to highlight “the importance of the little“, without which “the big could not function“.

So much for the philosophical introduction. Besides that, it is all about art. So, Matos has invited artist friends to paint the stones, to provide them with messages, or to assemble them into art objects. 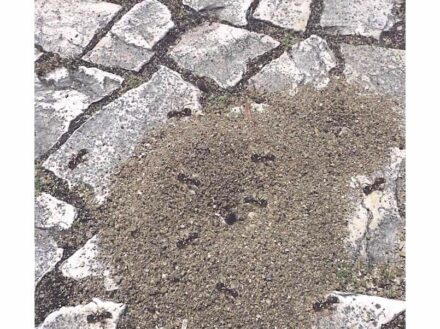 In addition, there are images that Matos has collected during his wanderings through the streets and squares of the world: for example, his staging of a golfer putting in a hole in the middle of the city (see photo at the top) or the photo of the ants that have built their nest under the pavement. For the little animals, the old saying from the student movement certainly applies, that under the pavement lies the beach.

There are numerous texts about this. Unfortunately, they are only in Portuguese.

The book costs 25 € (including postage) and can be ordered from Ernesto Matos by mail.

There is nothing new, however, about the initiative that wants to elevate the art of the Calçada Portuguesa to the rank of a cultural heritage of humanity.

Most recently, in 2018, the Lisbon City Council decided to allocate €100,000 to prepare an application to the UNESCO World Heritage bodies. This was to gather information on the significance of the pavement for Portugal’s capital and beyond. Such facts on a scientific basis are necessary for an application. 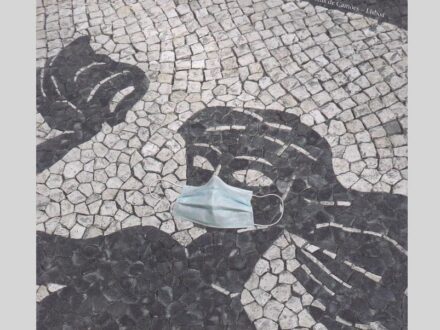 In any case, street paving does not appear in its own right on the relevant Unesco pages. It is mentioned only in passing, together with the characteristic azulejo tiles and fado music, in an application to make parts of Lisbon’s old town a World Heritage Site.

Incidentally, these 3 cultural assets were to play a role in the Portuguese pavilion at the 2020 World Expo in Dubai. However, the Expo was postponed by one year because of Corona.

Note: the beverage company Red Bull, which likes to associate its drink with youth-oriented sports in an extraordinary ambience, discovered the Calçada Portuguesa: in 2019, it had a youthful BMX cycling champion demonstrate his art in the most beautiful places in Lisbon.

A drone filmed the whole thing from above, so that in the video of almost 3 minutes length you can finally see the pavement in its entirety.