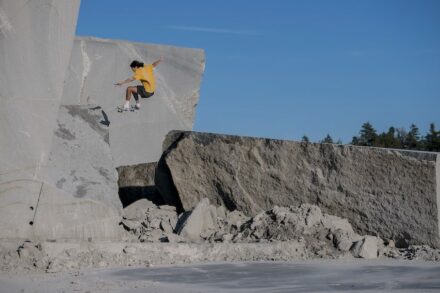 One of the stars says: “It’s extra fun to skate on Larvikite, because it’s very hard. It makes the board glide better“

A quarry belonging to the Norwegian company Lundhs, known for its Larvikite and innovative marketing ideas, was the setting for the latest image film of the beverage manufacturer Red Bull. Some of the best skateboarders in the world met there and showed their tricks on the specially made obstacles made of the stone, which shimmers mysteriously when polished. “It’s extra fun to skate on Larvikite, because it’s very hard. It makes the board glide better,“ said Didrik Galasso, one of the world stars in that sport and one of the group of four in the film.

The fact that representatives of the beverage industry, the stone industry and a sport for young people came together for this marketing idea was actually obvious.

“It all started with Andreas Mogster, athlete manager for Red Bull in Norway, who is also from Larvik, wanting to gather the skate elite in his hometown, “ the Lundhs press release states. “Having grown up skating in the town square on larvikite blocks, his idea was to create skatepark obstacles out of the material, adapted for the best skaters in the world. “
He goes on: “Lundhs thought the project was exciting and wanted to contribute.“ 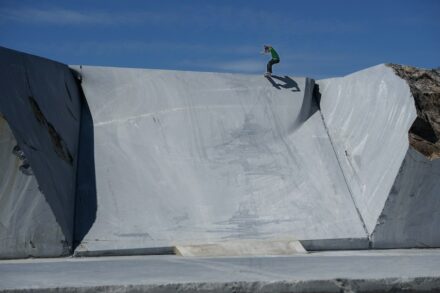 Didrik Galasso is also from Larvik, and because he is now a world star in his sport – with contracts with Enjoi Skateboards and Nike, as well as 141,000 followers on Instagram, as the press release informs – the beverage company signed him for the film work. The other main actors were Torey Pudwill from the U.S., Chris Haslam from Canada and Angelo Caro from Peru.

The company Steinriket reshaped the blocks of Lundhs to the obstacles for filming.

“It took a lot of work to manage the project and make it happen, first and foremost in terms of safety but also in terms of practicality, “ Lundhs resumes. 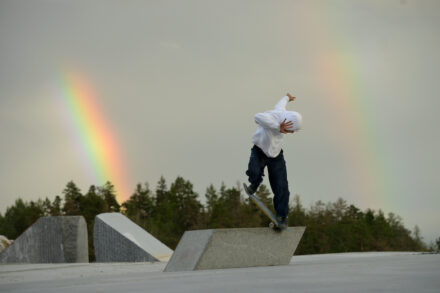 The film is 8:28 minutes long and shows the fascination of skating in a fascinating ambiance.

One of the stars is impressed and compares the quarry with the high stone walls in the Grand Canyon. And we hear the stars – totally cool, of course – debating how to deal with the sloping surfaces. “Anything could go wrong, you never know,” they comment, as the script dictates. 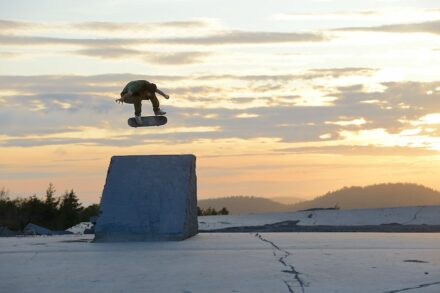 The happy ending also brings the audience back to civilization, so to speak: the Larvikite obstacles are now in Furumoa, an amusement park in the Torstrand district in the city of Larvik. A new skate park has been built there on a former basketball court.

Then the heroes have already moved on, but in Furumoa and by taking a sip of Red Bull, everyone can become a hero themselves.

In November 2020 was the start on TV and in cinemas.