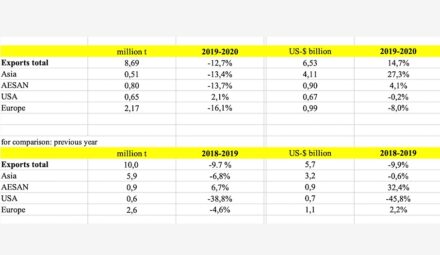 The most important buyers came from Asia / The country has overcome the Trump shock / Probably due to the container chaos: -8% in shipments to Europe

Despite the Covid-19 pandemic, China’s natural stone exporters closed the year 2020 with an increase of (+)14.7% compared to the previous year. That was in US-$6.53 billion or in tons 8.69 million. The statistics were provided to us by the China Stone Material Association (CSMA).

Together with the data for imports, they give an idea of China’s dominant role in the world stone market.

Also in 2020, the most important buyers came from Asia. This had already shown in the first months of the year, when total Chinese trade with this part of the world had increased by (+)6.1% in Q1, despite Covid-19. What is interesting here is that Chinese suppliers achieved strong increases in value despite significantly reduced tonnage.

In contrast, natural stone exports to Europe declined significantly by (-)8%. The most important reason for this is probably the turmoil in international maritime traffic, especially the shortage of containers.

Exports to the USA remained almost unchanged (-0.2%). However, there had been a sharp slump there in 2019 (-45.8%). The reason for this had probably been the trade policy of ex-President Donald Trump.

There was also a significant decline in natural stone imports in 2020 (-12.3%) compared to the previous year. Nevertheless, they reached a value of US-$2.37 billion or 12.6 million tons.

Since China’s economy is now running again, one can assume that stocks are empty and there is a new demand.