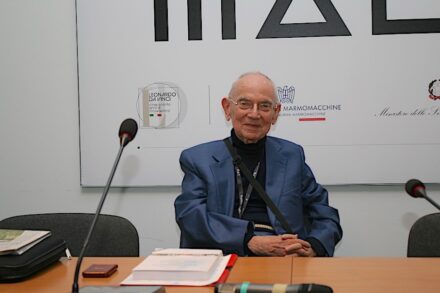 After years of growth, the Statistics Yearbook records a slowdown in both extraction and global trade for the first time in 2019

After decades of continuous growth, the global natural stone industry recorded a cooling off for the first time in 2019 compared with the previous year: extraction rose by only +1%, i.e. gross 316 million tons (including waste that was not recycled) and net 91 million tons. The international exchange of goods – characterized by the fact that natural stone is often not consumed in the countries where it was quarried – decreased by (-)0.8%. These figures can be found in the 31st edition of the Statistics Yearbook “XXXI Rapparto marmo e pietre nel mondo 2020 / XXXI Report marble and stones in the world 2020” by Dr. Carlo Montani. The year 2019 is analyzed.

Unlike in previous years, this time there was no presentation at Marmomac – of course: Corona. But Montani did not even present his latest work virtually himself – someone else did that for the Marmomac Restart. However, the video of it has not yet been put online on the net, contrary to what the fair promised.

Numerous trends from previous years were confirmed in 2019. 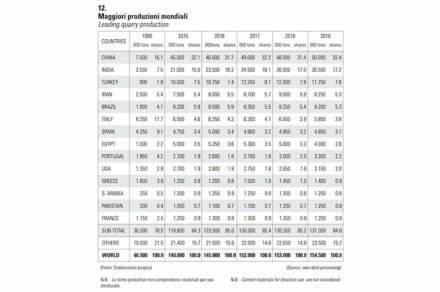 Overall, Asia’s importance for the industry has increased. The continent, to which Montani geographically includes Turkey, now accounts for 56% of global production. And a large part of the natural stone trade is also handled within this economic region or goes there from other supplier countries. 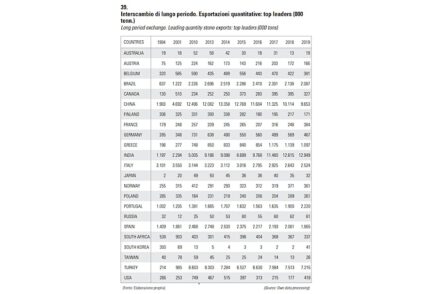 India has meanwhile reached the number one position among exporters: it came with a slight increase to nearly 13 million t in 2019, with most of it going to China in the form of blocks. China, for its part, is now only number 2 in the global ranking of exporters.

But China is a big fish anyway: Turkey, Brazil and Iran also export large quantities of raw blocks to China. They are the countries in 3rd, 4th and 5th place in the exporters’ ranking.

China thus undoubtedly has a unique selling point as a world power in the industry. One can be curious about the coming years, when the country has really got going in terms of natural stone design and architectural ideas.

Among the individual countries that Montani, as usual, takes a closer look at, we want to single out Iran. The country has achieved considerable growth in its stone industry in recent years despite all the sanctions from the West. Meanwhile it is in 4th place worldwide in stone extraction and, as already mentioned, in 5th place among exporters, although it must be added that these deliveries are almost exclusively to Asia. While the raw blocks go to China, the stone industry of the country also manages to sell end products, mainly to the neighboring countries.

Montani also points out that the country, where there is a shortage of many goods, has an “above-average consumption of natural stone”.

Furthermore, the USA is the most important destination country for deliveries of end products worldwide. Brazil has ousted China from first place here, but in 2019 it was still far from its export peak in 2013. Turkey was essentially only able to score here with cheap goods, Greece performed well as always.

Montani names Africa and Latin America as continents where investments in both natural stone consumption and extraction are worthwhile, where there is no real stone industry so far – with the exception of Egypt and Brazil respectively. He names Russia and South Africa as individual countries.

As usual, Montani also devotes the 31st edition of his yearbook to the competitors in the natural stone industry and mentions that the ceramics industry is currently not showing any great growth either.

However, the upward trend of the last few years has continued for artificial stones, i.e. engineered stones and conglomerates. He speaks of an “interchangeability” of the two product types, probably meaning that the consumer is not quite clear what the difference between both is, and that the stone industry has to pay more attention to this in its marketing.

In general: as in previous years, he demands more marketing from the stone industry.