“Axis Mundi“ by Nicolas Bertoux: a Christmas tree made of tools that were used in marble quarries 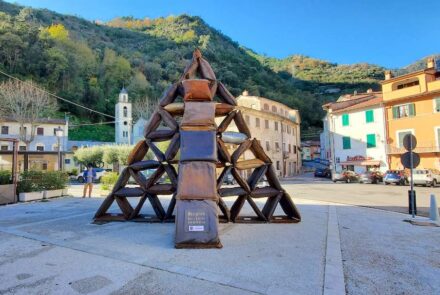 In Seravezza, not far from Carrara, the artist has placed an installation of 111 hydro bags at Piazza Carduzzi

In Seravezza, not far from Carrara, in the middle of the small town, there is a Christmas tree that fits very well in the region – because it is very unusual, as such: it is the installation “Axis Mundi“ by artist Nicolas Bertoux, who with his work has brought the world of the many quarries in the surrounding marble mountains to the city center.

Similar to a steep pyramid or a fir tree with dense branches, the work is made of 111 hydro bags. These tools were used in the quarries to separate large precut stone walls from the rock.

The elements used in the artwork are iron hydro bags, which were inflated with water under high pressure. Recently, cushions made of other materials have also been used, using compressed air as power. 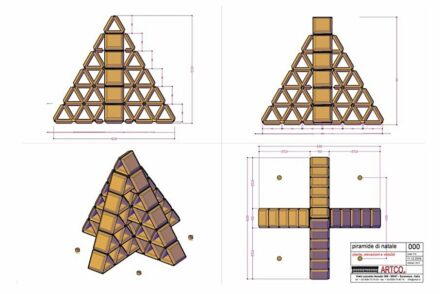 Bertoux, who mainly works with marble from the region and always chooses the raw blocks himself in the quarries, usually begs there or these tools, which generally go into metal recycling after a single use.

Thus he is a pioneer in the scene of artists: he not only uses the stone artistically but also the sometimes spectacular tools of the sector.

With the title “Axis Mundo“ for the installation, Bertoux alludes to old philosophers‘ ideas according to which the world had an axis that would run through a place on earth.

Christianity, for example, located the world’s axis in Jerusalem, or more precisely, at Mount Golgotha. Often. A tree (like the Christmas tree) represented the axis.

The installation will be on display at Piazza Carduzzi in Seravezza until January 07, 2022. 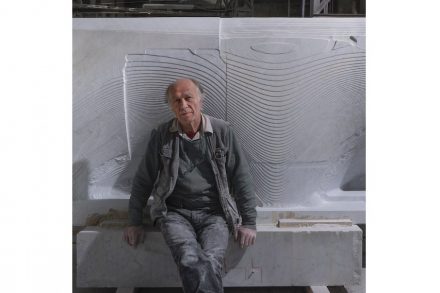 Nicolas Bertoux was born in France and began his career as an interior architect in Paris before focusing entirely on sculpture. His main goal is to integrate his works into the environment by taking inspiration from the space, culture, history, and nature of the location.

Together with sculptress Cynthia Saw he has founded die Fondazione Arkad located in Seravezza in a former marble factory. There, courses for sculptors are offered as well as seminars about the future of sculpting. More than this, exhibitions and events are regularly held.