Is China’s reticence from markets in the West the main reason why all major natural stone exporting countries achieved an increase of over 25% in 2021 compared to the previous year? 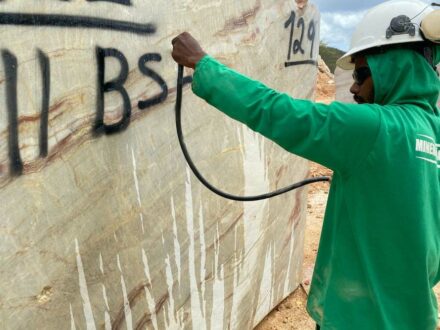 Brazil has just reported a fabulous +35.5%, and similar figures will come from Turkey, for example / How does this go together with increased freight costs?

Automatic translation at the top of this web page

Brazil’s nationwide natural stone association Centrorochas (Centro Brasileiro dos Exportatodres de Rochas Ornamentais) has sent us its export figures for 2021, which we reproduce without analysis and comment (see below). Normally we would not do that in principle, but this time the situation is particular: Brazil has reached a fabulous +35.5% in 2021 compared to the previous year, and not only Brazil, but all other export giants have recorded comparable increases – this in the 2nd year of the Covid-19 pandemic!

So the question is: what can be learned from such increases if all achieved them?

Perhaps they only reflect compensation for the more than -20% drop from the previous year? At least in the case of Brazil, this cannot be the case because the country had closed 2020 with a positive result.

Maybe, the answer can be found in Asia: China had reduced its exports in 2019 and 2020, at least in terms of deliveries to the United States and Europe, partly because of President Trump. In view of the huge amounts of finished products, with which it had flooded the world markets for 2 decades, that could explain the current growth among coompetitors. 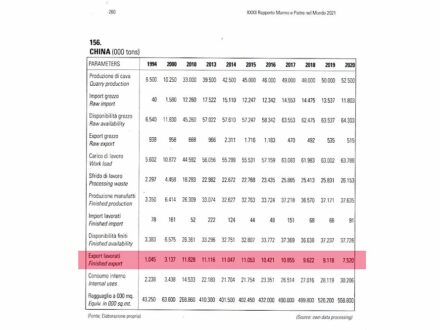 So did last year’s winners essentially benefit from a gap in the market?

So we will put the countries‘ export statistics for 2021 online without comment until we have clarity on the bigger picture.

Because there are more questions:
* How could enormous export increases happen when there were extremely increased freight rates?
* Have customers easily accepted growing prices for natural stone?
* Would they perhaps even be willing to pay still more for this special material?

The figures from the Brazilian association:

Exports registered the best sales in the history of the sector in 2021, 1.34 billion dollars, according to data released by the Brazilian Center of Ornamental Stones Exporters

The Brazilian exports of ornamental stones exceeded, in 2021, the levels of sales recorded in the pre-pandemic period and in the entire history of the sector. According to data released by the Brazilian Center of Ornamental Stones Exporters (Centrorochas), last year the country invoiced 1.34 billion dollars.

Between January and December, the brazilian market sent 2.4 million tons to 132 countries located in all five continents and reached 35.5% of growth compared to 2020. One of the main reasons for the large increase is the greater sense of safety of entrepreneurs in exporting their products after the agreement signed between Centrorochas and the Brazilian Trade and Investment Promotion Agency (ApexBrasil). Together, the two entities are developing It’s Natural – Brazilian Natural Stone, a project to encourage exports in the sector that currently supplies about 140 companies.

The United States leads as the largest consumer representing 62.7% of all exports. Followed by China (11.5%), Italy (6.5%), and Mexico (3.8%). The four countries are part of the eight target markets indicated by the sectoral project.

“In a year logistically complex, the national stone sector achieved this historical record. The credibility of Centrorochas with the entrepreneurs, added to the milder scenario of the pandemic in the second half of 2021, to the development of the actions of the sectoral project and also to the world’s civil construction sector heating up, contributed to this advance. We exceeded by almost 40 million dollars our highest sales until then, which had been registered in 2013”, declared the president of Centrorochas, Tales Machado.

“The year of 2021 was full of challenges, but together we knew how to transform them into opportunities and victories. It is gratifying to see that our partnership with the ornamental stone sector generated record exports and, consequently, contributed to more jobs and income to the benefit of thousands of Brazilian families”, declared the president of ApexBrasil, Augusto Pestana.

The Largest exporting states
Espírito Santo (83.3%), Minas Gerais (9.9%) and Ceara (2.8%) were the three states that exported the most ornamental stones from January to December last year. The state of Espírito Santo was the biggest exporter of the sector in 2021, accumulating a total of US$ 1.14 billion, accounting for 83.3% of the total value of the stone exports in Brazil.

The capixaba (Espírito Santo) evolution during the year, regarding the previous year, was 37.02% in value (dollar) and 8.95% in weight (ton), showing an organic growth in added value of exported materials of 25.77% in average price (dollar/ton). Minas Gerais totaled US$ 132.76 million and a growth of 25.5%, remaining the second largest Brazilian exporter. Ceara accumulated a total of US$ 37.87 million and 50% growth in exports in the referred period, highlighting the shipment of quartzite, raw or processed.

According to the president of the Union of the Ornamental Stones, Lime and Limestone Industry of the State of Espírito Santo (Sindirochas), Ed Martins, the sector is responsible for approximately 10% of Espírito Santo’s GDP and it concentrates the largest number of companies in the country, generating about 25 thousand direct jobs and 100 indirect jobs in the state. “The productive chain of stones has close to 1,600 companies in Espírito Santo and 200 mining fronts. When we look at the external market, without leaving aside our domestic market, one of the advantages of our industry is its diversity, which allows us to meet the needs of markets with different profiles”, he pointed out.

About the It’s Natural – Brazilian Natural Stone
The It’s Natural – Brazilian Natural Stone is an export incentive program developed by the Brazilian Center of Ornamental Stones Exporters (Centrorochas) in partnership with the Brazilian Trade and Investment Promotion Agency (ApexBrasil). The program aims to stimulate and increase the exports of Brazilian ornamental stones, through a set of strategic actions for internationalization with promotional activities, strengthening the image and development of the sector in the market worldwide.

About ApexBrasil
ApexBrasil works to promote Brazilian products and services abroad and attract foreign investment to strategic sectors of the Brazilian economy. In order to achieve these objectives, the Agency carries out diversified trade promotion actions aiming at promoting exports and enhancing the value of Brazilian products and services abroad, such as prospective and trade missions, business rounds, supporting the participation of Brazilian companies in major international fairs, visits of foreign buyers and opinion leaders to be introduced to the Brazilian productive structure, among other business platforms that also aim at strengthening the Brazil brand.