Massive building with small blocks of stone: in Lyon, the architects of the Gilles Perraudin studio have built a FabLab to promote young craftsmen 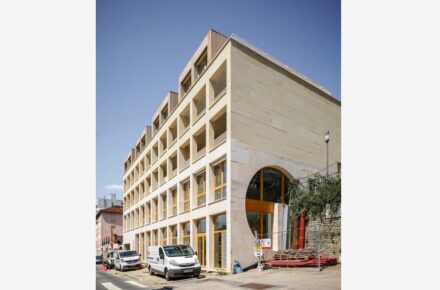 One of the goals of the client, a master carpenter, was to give more value to the natural materials of wood and stone

Massive construction with stone ashlar, once practiced around the world for significant buildings, is still common in France for private construction. In the city of Lyon, there is a new project that once again explores the possibilities of such buildings. The architect was Gilles Perraudin, figurehead of this construction method, the client was a craftsman who had unusual ideas for his project.

Daniel Damidot, as he is known, is a very successful master carpenter who runs several workshops in Caluire-et-Cuire, a suburb of Lyon. He has been honored with the title of “Best Craftsman of France“, and one of the concerns of him and his wife Annie is to pass on his skills to young people, also with the intention that the young people adapt it to the requirements of today.

So, one of his workshops, just a few steps from the banks of the Rhône, was to become a FabLab. The abbreviation stands for “fabrication laboratory”.

Damidot wanted a place for young people to learn and experiment. It was important for the architect that the young people had enough space in the new building to be able to move larger parts, as is usual in a workshop.

On the floors above, there should be offices for planning and overnight accommodation.

The client explicitly wanted a building with a distinctive architecture that would also pay tribute to natural building materials.

The 1st planning phase ended in a disaster, among other things because the neighbors feared noise. It has to be said that Caluire-et-Cuire is traditionally a craftsmen’s area with many workshops. Practically around the corner is Croix Rousse, also known as the staircase district or Montmartre of Lyon.

For the 2nd attempt, the couple found in a tender the architect Gilles Perraudin, who has his office in the big city. His idea of constructing the building in massive construction with natural stone convinced the clients and also the licensing authority. Then a consulting office was called in, which turned around the mood among the residents with arguments and also helped with the questions of financing. 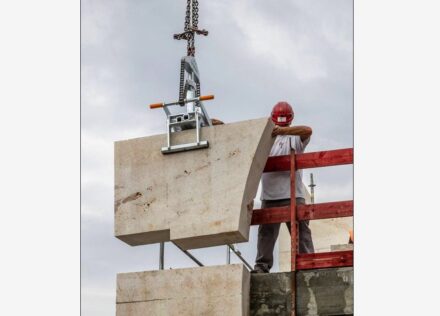 The walls of the new building consist of 40 cm-thick solid stone elements. For the first and second floors, the particularly hard Spanish Limestone Albamiel was implemented. On the floors above, it is the softer Marina Rosal. Both types come from the quarries of the Spanish company Rosal Stones.

A total of 500 m³ of stone was used. The elements were cut to size at the company’s site near the city of Murcia, where they were numbered, and then transported by truck to Lyon.

Wooden beams were planned for the ceilings. According to the architects’ report, however, there were problems with pollutants in the subsoil, so it was finally decided to use concrete. 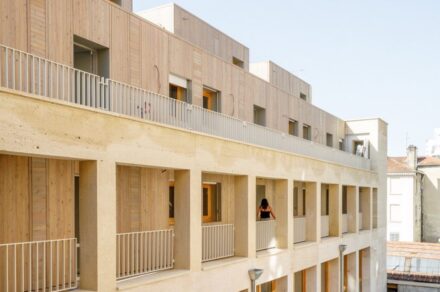 The front facade is determined by a simple grid. At the back, balconies and terraces are integrated on the upper floors. Their outer walls are covered with larch wood.

Otherwise, the walls do without plaster. They are held together by their weight and a little mortar. 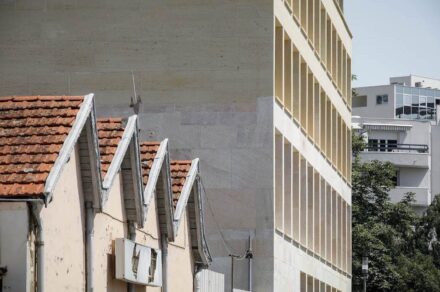 This gives the gables on the side a distinctive feature: the types of stone above and below can be clearly distinguished, and the structures in the stone cannot be overlooked either. One of the architects’ aims was thus to present stone as a material of nature. 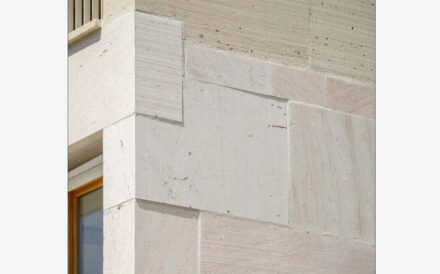 In one place you can also clearly see how the stone elements are placed together there. 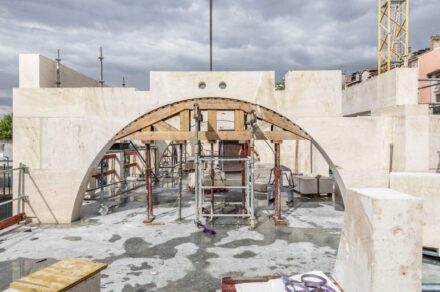 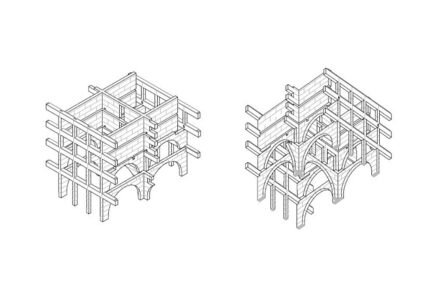 The first floor (above the underground garage) houses the workshops. To maximize the size of rooms, the partition walls are designed as arches. The arches can be seen on one gable end.

The first floor accommodates offices. Above that, on two more floors, four apartments each follow. At the very top, there are maisonettes that are set back a bit.

Meanwhile, the apartments are offered as furnished apartments for longer stays under the name Goutte d’Ebène. There are photos of the interiors on the webpage.

Except for the maisonette on the roof, the walls have no insulation. Experience from similar projects has shown that the thermal mass of the stone provides for the regulation of temperature and humidity in the rooms. 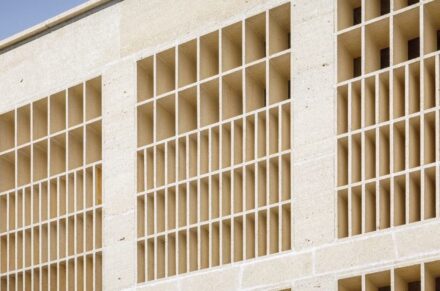 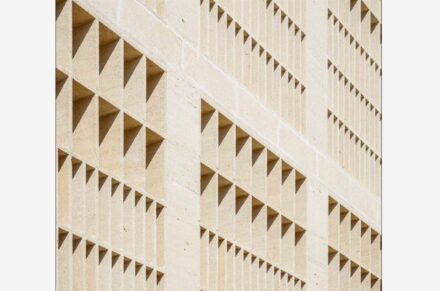 The stairs to the upper floors are integrated into the gable on one side. To the outside, they are hidden behind a distinctive structure in the manner of Arab mashrabiyas.