At the 2021 French Prize for Architecture with Natural Stone, buildings in solid construction were awarded 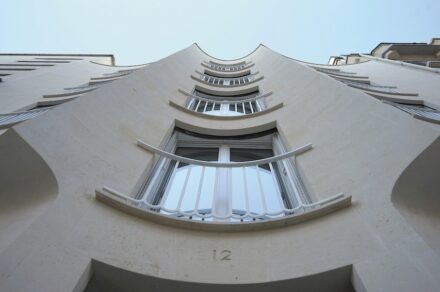 France’s natural stone prize with the programmatic title “Construire en Pierre Naturelle au XXIe Siècle“ (Building with natural stone in the 21st century) is awarded every 2 years at the Rocalia trade fair in Lyon. In this 6th edition in 2021, all winners were dedicated to solid construction with stone.

Such type of construction is a peculiarity from France, and it is experiencing a great demand in times of sustainability. We list some of the aspects mentioned in the descriptions of the winners:
* Solid buildings with stone have an exceptionally good balance in grey energy, because stone is simply there by nature. Extraction in the quarry and processing in the factory with modern technology requires little energy;
* walls made of solid stone ashlars, due to their inertia, act as thermal stores; that is, they store the coolness of the night and protect against the heat of the day;
* a façade of natural stone blocks is decorative even without plastering and can be easily cleaned over an expected lifetime of 50 years;
* if a solid stone building is demolished, the stone ashlars can be reused.

To be noted: Natural stone as a building material can only really show its positive carbon footprint if it is sourced from quarries no more than 100 km away. Then such a building also fits harmoniously into the image of a town or village. 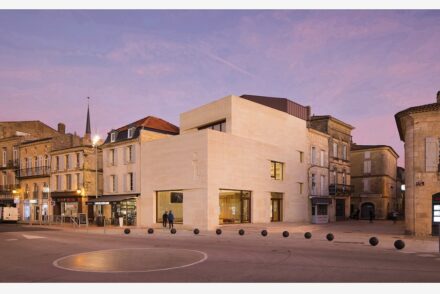 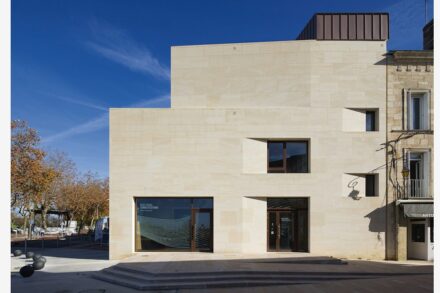 The jury’s Grand Prix paid particular attention to this aspect. It went to the architectural firm Gayet/Roger Architects for the new tourist center in the town of Blaye in the Gironde department not far from the Atlantic coast. The architects actually achieved a miracle there: in the midst of the small-scale façade structure, they planted a building with simple geometry on a street corner that one might expect would suffocate the entire surrounding area.

But it does not, and the reasons for this are also related to the limestone used: it comes from a quarry about 90 km away, and it is familiar from the neighboring buildings. The exterior wall consists of three layers: 10 cm of stone on the very outside, behind it insulation, then 25 cm of stone as load-bearing masonry. The air can circulate here and allows the stone to breathe. Concrete is used only for the transitions.

In addition, the structure, with its fortress-like appearance, has a connection to local history: the tourist attraction there is, in fact, one of the many fortresses built by Napoleon’s master builder Vauban. Finally: large windows allow the view from the street into the interior of the building and invite tourists to visit. On two upper floors there are terraces that provide a view over the city. 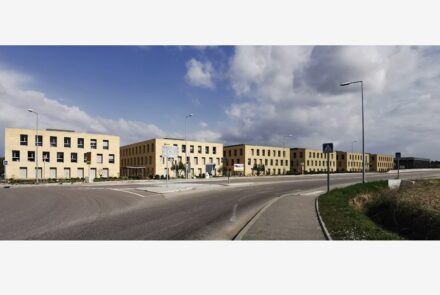 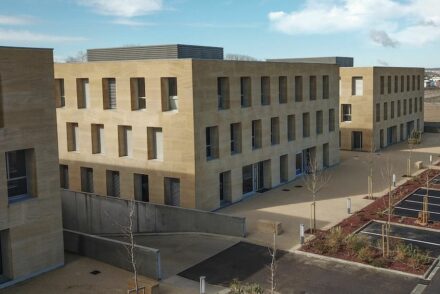 A special jury prize went to the “Les Carres de Lenfant“ project in the commercial zone of Aix-en-Provence by Battesti Associés architects. Here, the exterior walls have a load-bearing function for the buildings. The standardized stone blocks are 60 cm thick and serve as insulation in summer and heat storage in winter.

The buildings are six individual office buildings. Their masonry consists of standardized elements, which, in turn, reduces material costs as well as construction time. Pierre de Castillon du Gard from the surrounding area was used. 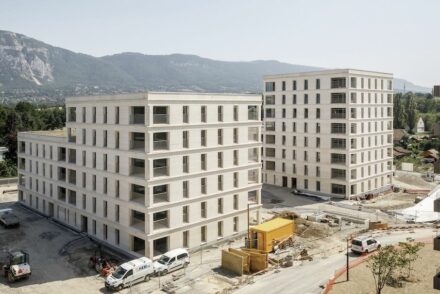 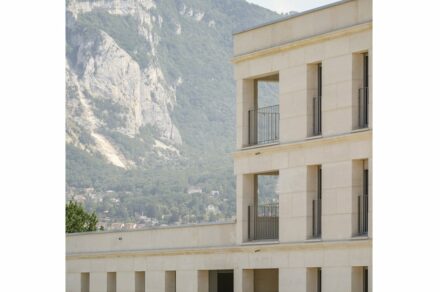 Another prize went to a project in Switzerland in the village of Plan-les-Quates in the canton of Geneva. Here, too, the 65 social housing units are built entirely of solid stone blocks without reinforcement with concrete or steel.

For this purpose, different types of stone were used depending on their function:
* on the first floor there is a material very resistant to the weather,
* for the components above, strongly exposed to rain (cornices, windowsills), a different stone was chosen,
* inside, breathable varieties were used, which contribute to a pleasant indoor climate.

The region is prone to earthquakes. Thus, the architects of Perraudin Archiplein Consortium chose a construction where the stone blocks are only “interwoven“ with each other. 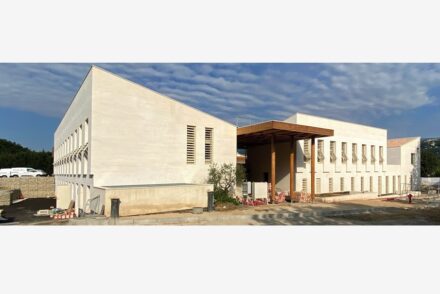 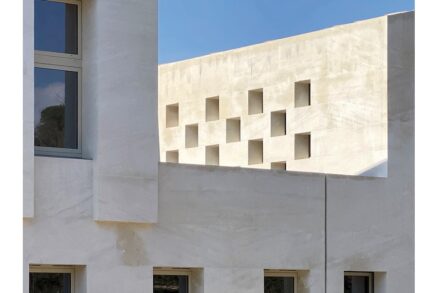 The school in Opio in the Alpes-Maritimes département was also about bringing the children closer to home. To this end, the kindergarten in the basement and the elementary school above were built with solid natural stone from the surrounding area.

Special aspects are the entrance to the kindergarten, which surrounds a 100-year-old oak tree, and the inner courtyard as a playground for the children. Here they are protected from the summer heat and the winter wind. The outdoor facilities offer a wide view of the surrounding area.

The architects from the Teissier Portal office write, “We avoid unnecessary and ostentatious architectural gestures and simply respect the site. Thus, this school project becomes timeless, not antiquated, not modern, but timeless.“ 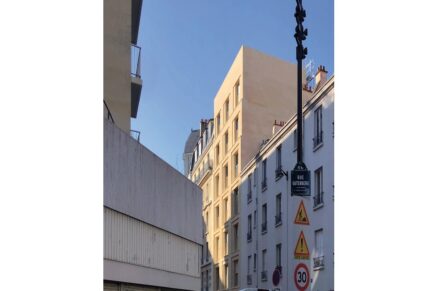 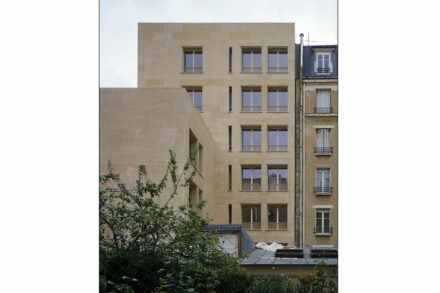 “Stone is a material that is sufficient unto itself,“ write the architects from the Raphael Gabrion office about their nine social housing units with commercial space on the first floor in Paris’ XVème arrondissement. They decided against the so-called high-performance materials and relied on the strengths of solid stone, including its 100 percent reusability and a short construction time.

They also referred to Parisian history, recalling urban design before and after Baron Haussmann, when limestone became a preferred façade material. Stone from the quarries of Saint-Maximin, 70 km away, was used here (Rocamat stone company). 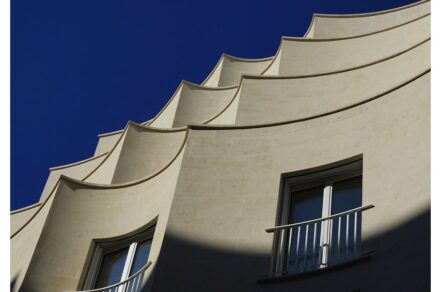 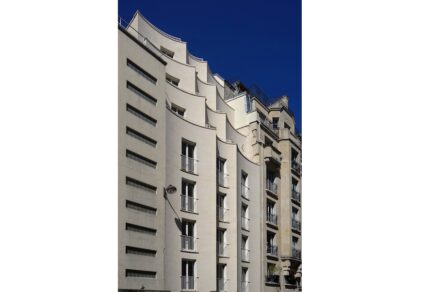 The award-winning project with eight apartments for families in the Vème Arrondissement showed that with natural stone not only right angles, but also round shapes are possible. In this way, the architects of the office J-C. Quinton wanted to put their signature on the upper floors, while below the facade was subordinate to the surroundings.

The stone façade is self-supporting. The material was extracted from the quarries of Vassens about 80 km away.