Under the name “LASA !ndividual®“, the well-known white marble is now also available in a product line with colors and structures that were previously unusual for this stone 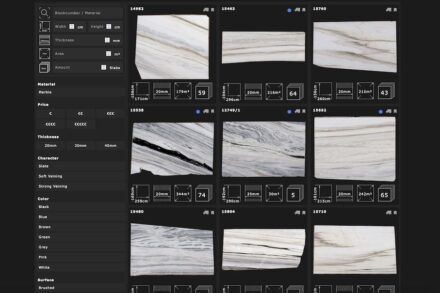 “LASA !ndividual®“ is the name of a product line that the company Lasa Marmor, based in the Italian Alps, launched 4 years ago. The product line here means that although it is the well-known marble – famous for its special hardness, durability, and shine – these new stones have unusual colors and veins.

In the meantime, the new brand has established itself on the market and word is spreading about the innovative concept behind it: In essence, the idea is to use digitization to take greater account of natural conditions than before and also to meet current consumer demand.

Natural conditions mean that in a marble quarry, the layers (technical term: banks) are different; normally, a lot of material must be sorted out and dumped on the heaps as rejects so that in the end there are numerous slabs with a stone that is as uniform as possible.

What is meant by the new desire of customers is that after decades where materials had to be as uniform as possible, there is now also a demand for variety within a grade.

!ndividual is the name Lasa has given to its new product line. It is a word that is understood in very many languages. The exclamation mark at the beginning is an idea of product and marketing manager Kurt Ratschiller, who developed the concept on behalf of the company management: the new brand wants to set an accent.

However, he clarifies in conversation, “There is no difference in quality between !ndividual and the nine previously known varieties, they have the same density, the same crystal structure, etc.“ !ndividual is also “genuine Lasa,“ he clarifies.

The pronunciation of !ndividual is the same as the normal word individual. 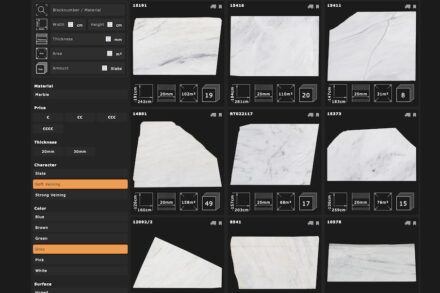 Within the new product line, the differences between the slabs can be very great, as can be seen when browsing through the !ndividual database: there are those with really wild veins, those with stitches in different colors, and many other variations.

Also, the panels are not cut to standard sizes of length times width, but are sometimes just a strip of medium width. You also have to get used to crooked sides. In addition, the number of plates of a single variant is usually limited.

The !ndividual database is therefore a place for searching and finding: either the user can simply let himself be inspired while browsing, or he can specify filters and thus selectively track down his desired plate from more than 4300 scans.

A planning tool is provided downstream so that the user can then virtually incorporate the selected pieces into his or her project.

At Lasa, the slabs are scanned at the end of the polishing line.

Quarries in other countries also already take photos of their slabs – but Lasa has a unique position in that it has geared its !ndividual database to those batches that would not normally be suitable for marketing.

Without digitization, it would be almost impossible to market such grades: it is generally not possible to send samples of plates that are only individual pieces – but digitally, the customer can look at all of them. 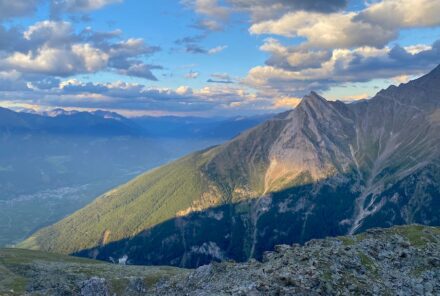 This also makes more sustainability possible: the gem natural stone is utilized as completely as possible, as is the basic principle of nature – nothing is thrown away.

Who are the users of the database?

“In the beginning, it was mainly stonemasons and traders who were looking for small quantities for special orders from their customers,“ says Ratschiller.

But in the meantime, architects with larger projects are also showing interest, he adds.

And the prices of LASA !ndividual? Don’t the panels have to be less expensive than the standard grades? 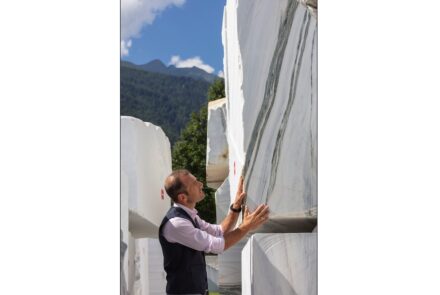 “Sure,“ Ratschiller admits bluntly, “after all, we save on selection and have no offcuts.“

Finally, a word about digitization: before joining Lasa, Ratschiller worked in the fruit industry, which is an important branch of the economy in the area surrounding the Laasa Valley. There, it is standard practice for the sorting machine, for example, to take several photos of each apple in a fraction of a second, which are then used to automatically sort the fruit according to color, shape, and defects. He brought this way of thinking to Lasa 4 years ago.

At this point, the importance of the software database as a tool for sorting becomes apparent.

Kurt Ratschiller takes stock: “After 4 years, LASA !ndividual currently stands at just under 10% of our total sales and accounts for just under 75% of our raw slab business,“ he sums up with pride. In general, he sees “still a lot of catching up to do in the natural stone industry in terms of digitalization.“