With tests in advance and meticulous quality control throughout building: at Finlandia Hall in Helsinki, the second renovation of the marble façades has begun 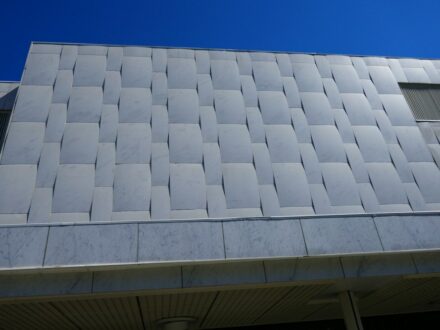 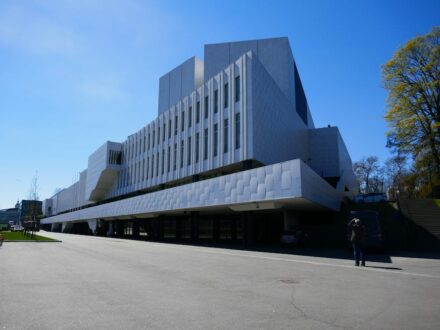 The white Lasa Nuvolato marble is now being used, partly as a result of an EU research project

At the famous Finlandia Hall of architect Alvar Aalto, the renovation of the white marble facade has started for the second time in March 2022, this time under different preconditions than the first time in the 1990s: in the meantime, there are test procedures with which one can reliably assess whether a natural stone will deform under the conditions on a ventilated façade.

And as a consequence, an Italian marble is even being used again, but this time the Lasa Nuvolato from Tyrolian company Lasa Marmo Srl.

This is because the city of Helsinki was keen to restore the iconic building for concerts and congresses to the way the world-renowned architect had planned it. Aalto’s (1898-1976) goal was, on the one hand, to endow the building with the elegance of white marble, both outside and inside; on the other hand, he had a soft spot for the south and wanted to bring some of it to the north.

Let us look back.

Some years after the completion of Finlandia Hall in 1971, there had been deformations in the Carrara marble slabs on the outside of the facade. Many had bulged and expanded. Soon the façade had a surface like a mattress, and in many places the marble had broken out of the anchors and become unstable.

There was a research project on the causes of the deformation and, starting in 1990, a renovation with the greatest possible consideration for the preservation of historical monuments. It was decided to use another marble from Carrara, but ultimately again an unsuitable variety.

Soon the same problems reappeared. In 2000, a major EU research project was launched. It ran for 5 years and was intended to find definitive solutions to the problem, as Europe’s entire stone sector was threatened. 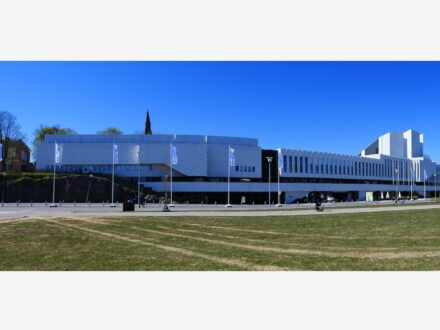 TEAM (Testing and Assessment of Marble and Limestone) was the acronym of the project, the budget was a respectable 4 million € (of which a good half came from the EU), 9 countries with a total of 16 companies or institutions were involved. The Research Institutes of Sweden (RISE) were responsible for coordination. It is the country’s central research center and is also chairing the country’s stone standardization.

Among other things, the scientists involved evaluated around 400 documents dating back to the year 1800. In the past, there had repeatedly been individual cases where marble slabs had buckled on buildings.

The number of such cases increased sharply throughout Europe in the 20th century, which was due to the fact that the precious stone could now be transported more easily and anchored to the facades using more modern methods.

We have linked the final report of the research below. One of the most important results is the aforementioned test methods that can be used to estimate whether a stone slab will deform on a façade. As part of the project, 75 sample slabs from 16 countries were put through the mill of experimentation in the lab. Contrary to what the project title “Testing and Assessment of Marble and Limestone“ says, the project also involved granites as well as limestones and sandstones, and several more.

In a separate text from our “Stone Detail“ series https://www.stone-ideas.com/92581/finlandia-hall-testing-methods-marble-panels/, Björn Schouenborg from RISE describes the testing procedures for us. He was in charge of the entire project. 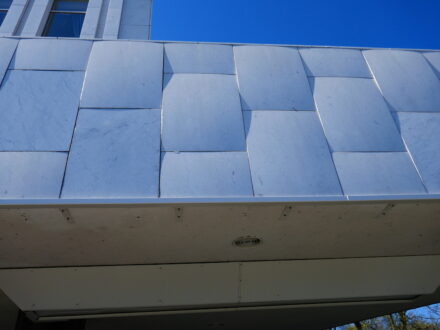 Back to the current refurbishment.

It was by no means certain from the outset that a marble would again be used on the façades: rather, from 2018 to 2021, there were series of tests in the RISE laboratories and on the roof of the building according to the new findings, using different types of marble, but also other white stone such as granite or even other materials such as concrete, ceramics and even recycled glass. 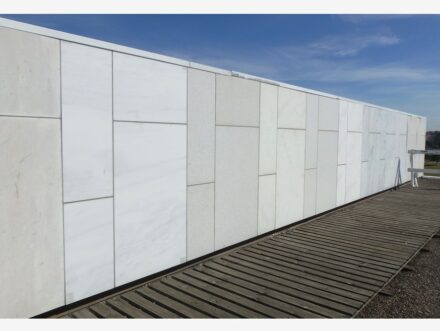 But now the installation of the Lasa Nuvolato on the façade has begun.

In parallel, a program of quality assurance is underway, of which Björn Schouenborg says: “I have never seen anything like it.” It is important to know that Schouenborg has been working as a geologist, consultant, and specialist for natural stone in construction for 30 years.

This quality assurance begins with the blocks being tested and meticulously located in the quarry. In processing, checks on the slabs follow.

Once they arrive in Helsinki, the experts there look for damage caused by transport, using ultrasound, among other methods.

Once installed at the façade, the panels will again be inspected immediately after installation, then again after 1, 3 and 5 years, respectively. For this purpose, individual pieces will be taken down and examined more closely in the laboratory.

The whole process will be meticulously documented and scientifically evaluated.

The reader suspects that the Finlandia Hall project holds great potential for the stone industry. One can draw a comparison to concrete or artificial stone: their production, processing and installation are mastered and also controlled by the industries in detail – now one will also get new insight for natural stones, for example, for processing, transport, or application to a façade.

The refurbishment is scheduled for completion in 2024. It will be accompanied by a modernization of the entire building technology and various adaptations to the current use. For example, there will be a larger kitchen for the restaurant or new rooms for the service that visitors expect today.

During the construction work, Little Finlandia will be available for events in the park across the street.