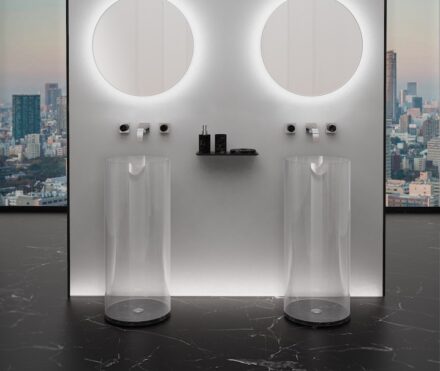 “Extreme XL“ is the name of the freestanding sink of Glass Design company, made of mouth-blown material. For the base the designers chose marble, optionally Bianco Calacatta or Nero Marquina. “Thanks to the treatment of the glass with nanotechnology, water does not cling to the sides thus guaranteeing a consistently clean and clear appearance and unhindered view of the marble base,“ according to the press release.

The Australian police have seized the largest-ever found methamphetamine haul hidden inside slabs of marble at a Sydney port.

The new Montreal Holocaust Museum will be built by KPMB Architects and Daoust Lestage Lizotte Stecker Architecture. The façade will feature Quebec limestone and glass.

Canova’s marble monument in Venice was treated for damage caused by rising damp and blocked downpipes.

The winners of the 2022 Aga Khan Awards for Architekture were announced. The new ourthouse in the Palestinian city of Toukrarem by AAU Anastas architecture was shortlisted (1, 2).

A 1800-year-old inscription, consisting of 3 marble pieces, excavated in the ancient city of Aigai in western Turkey’s province of Manisa, was deciphered. The text in ancient Greek describes the Aigai people’s distress as a result of Roman tax practices.

66 million years ago, a 10-kilometer large asteroid hit Earth, causing the extinction of the dinosaurs. This Chicxulub impact also triggered a massive earthquake that shook the planet for weeks to months.

Tonga volcano eruption, in January 2022, the largest submarine volcanic eruption of this century, stimulated life: a rapid, massive bloom of ocean phytoplankton started within just 48 hours after the event.

The World‘s Largest Grindstone is home in Shasta Lake City, California, according to the World Record Academy.

Video of the month: Sculptor Matthew Simmonds praises Carrara marble as it allows the artist to create very fine structures. We had reported on his filigree works of and asked, with a tongue-in-cheek, whether he might have found doors to unknown worlds hidden inside the rock (1).