Tyresta National Park in Sweden has a landscape relief at the main entrance, carved out of the native Moheda Black diabase 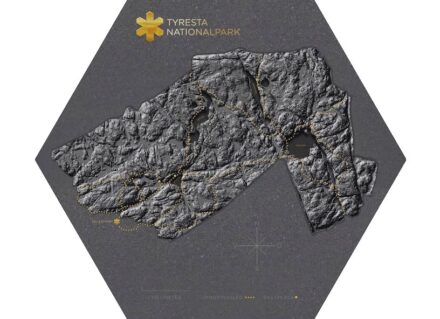 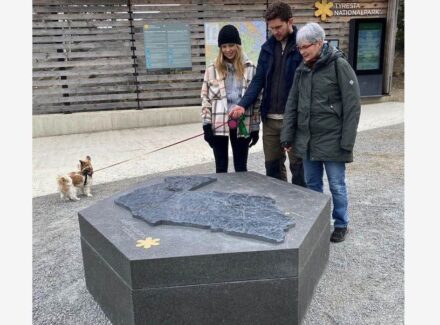 The project, spanning 10 years from concept to completion, reflects the evolution of stone technology

A bird’s eye view of the landscape is part of every national park. This is because such topographic maps are the most vivid way to present the mountains and valleys in an area. However: what is the best material for such a relief? Many examples are known from all over the world: some are cast from bronze, some are molded from plastic, and some are carved from wood. From the Swedish Tyresta National Park now comes another solution, made of stone, and from a local material, namely the dark Moheda diabase.

Actually, this choice of material has always been obvious because stone is extremely durable, so it can be placed outdoors.

However, the course of the project shows why stone has hardly ever been used in such applications before and why it took almost 10 years from the initial idea to completion in 2020 for the Tyresta National Park.

It is about the development of stone processing with CNC.

Indeed, 10 years ago it was still fraught with some uncertainties. For example, those responsible at the time were not sure whether it would be possible to transfer the contour lines to the stone surface with sufficient accuracy using a milling machine. And when it came to the costs, one of the estimates even reached the utopian sum of €750,000.

Since then, however, the situation has changed fundamentally and there is sufficient experience with CNC control and Robot arms.

In the case of the Tyresta National Park, the use of local stone was also motivated by the idea of creating a model that could be touched: on the one hand by the visually impaired and blind, and on the other by children. 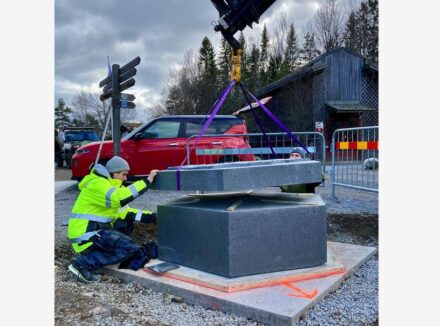 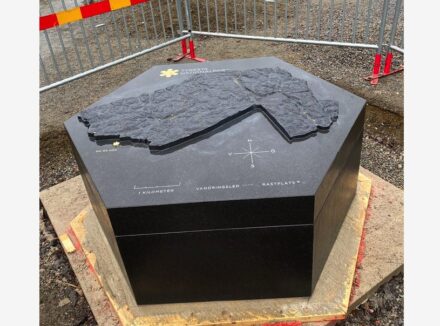 The basic shape of the landscape relief is now an equilateral hexagon with 1.5 m edge length and 1 t weight. It is milled from a block of Moheda Black Diabase on a scale of
1:5000 scale. The base consists of a 3 t piece of the same stone.

The total height of the object is 55 cm, so it does not pose any danger if the children want to climb on it.

Important for the decision in favor of natural stone as a material was also that you can engrave information in it. The short texts are highlighted here with color. 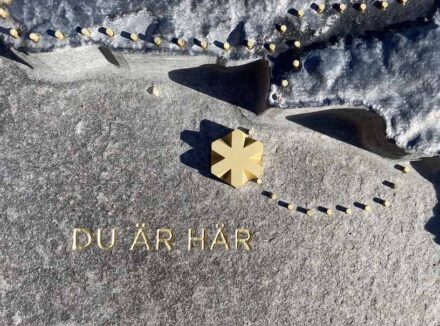 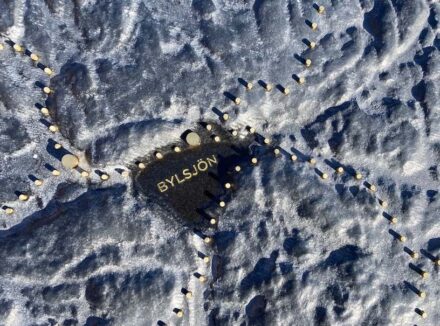 Yellow anodized aluminum pins mark the trails through the park. Stations for resting are specially marked.

After the work of the milling machine, the stone surface was reworked by hand. 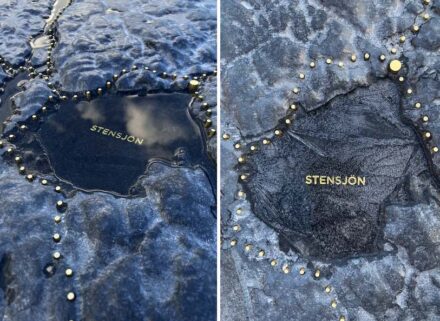 In the process, an additional design option emerged as if by magic: the highly polished stone surfaces of the lakes are jet black – in fine weather, they reflect the sky as in a real body of water, after a downpour, they become real water surfaces, and in winter they bear the sheen of ice and snow or the bizarre white of hoarfrost.

Scientific accuracy characterizes the relief, but a concession has been made: to make the mountains and valleys more visible, the ratio of height to width is distorted in scale. Normally, the landscape would have become extremely flat.

The hexagon as a basic shape is based on the logo of the national park, with a star on such a base. This mark is engraved in golden color in the relief and is also found not far away separately at the main entrance of the complex.

The relief itself stands at the end of a row of boulders in front of the entrance, symbolizing individual mountains from the park.

The project is described in detail in Swedish in the Sten magazine (03/2022) of the local natural stone association.