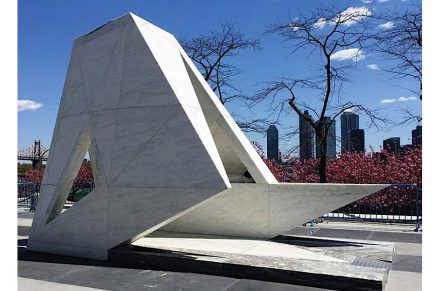 The sculpture at the entrance to the UN Headquarters bears the inscription „Ark of Return“, and won one of MIA’s 2015 Pinnacle Awards

„Ark of Return“ is a permanent memorial commemorating slave trade across the Atlantic. It was erected in 2015 at the entrance to the UN-Headquarters and received one of the Pinnacle Awards of the Marble Institute of America (MIA) in the same year. The jury acknowledged the exceptional achievement of natural stone craftsmen and engineers who participated in the project.

The initiative was launched by the United Nations Educational, Scientific and Cultural Organization (Unesco). Architect Rodney Leon was solicited to carry out planning and design. His family roots are firmly anchored in the Caribbean. Leon set out to objectify this unfathomable episode of man’s history – an estimated 15 million Africans were transported to South- and North-America and kept as slaves.

The geometric shape of the prism is a fundamental part of Leon’s work. Europeans had organized the slave trade which took place from the 15th to 19th century as a triangle trade – thus the triangular shape of the prism. Africans were transported to Middle-, South- or North-America and sold to landlords and owners of large plantations; the ships were then reloaded with products originating from the plantations. The payload was brought back to Europe where products were purchased with the profits. The products were used as means to pay for more slaves from Africa.

Sailing round-trip via North- and South-America enabled the tradesmen to make optimal use of the Gulfstream and prevailing winds. 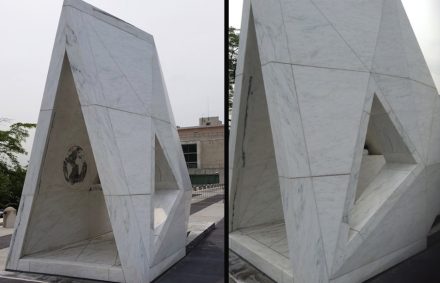 The memorial as a whole represents a stylized ship although in the readers’ mind’s eye an analogy to a large tent or tarpaulin, through which beholders can wander, is, perhaps, easier to grasp.

The side walls of different sizes as specified by the architect are mounted on a steel frame.

The architect’s specifications required the prisms to be precision-cut and exactly aligned and anchored into the complex set of angles.

From cutting the marble to mounting the finished work left craftsmen with a window of 45 days.

The interior walls of the marble slabs depict the shipping routes and the inhuman methods of keeping the slaves during transportation. 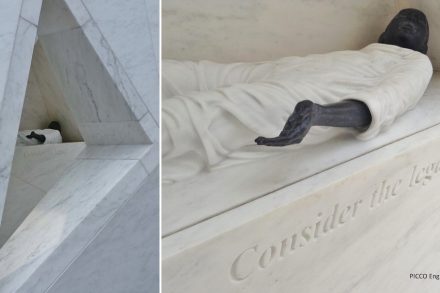 In a niche in the wall of the work a human figure made of Zimbabwean Absolute Black Marble fittingly represents the cargo. 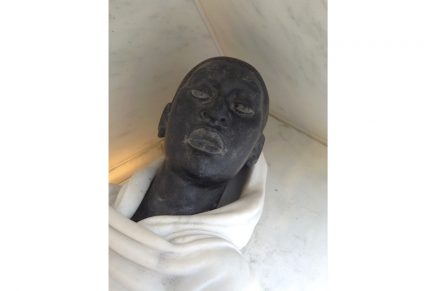 Approaching the figure, beholders will see tears running from the eyes of the androgynous facsimile which represents men, women and children alike, all of which were sold as slaves. 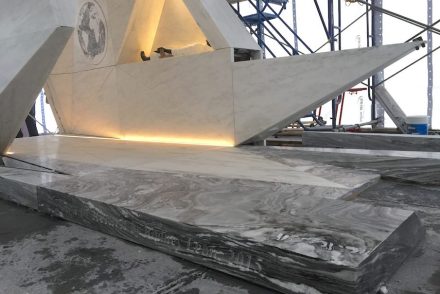 The floor of the piece shows wave-like veins.

The titles „Ark of Return“ is a play on „Door of no Return“ on Gorée Island off the Senegalese Coast. By turning around the meaning, the architect meant to give the history a new perspective: the triad „Acknowledge the tragedy, consider the legacy, lest we forget” is meant to warn beholders of the tragedy of exploitation, human trafficking, and modern slavery still rampant today. 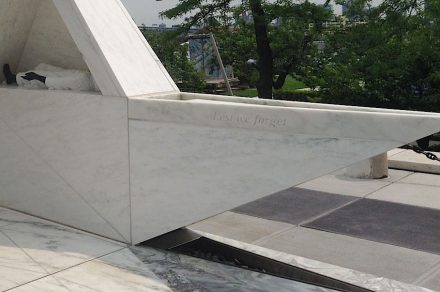 The final station though the memorial is a triangular basin, in which visitors can reflect on what they saw, as stated on the architect’s webpage.

A variety of Danby White Marble originating from Vermont was implemented.

Rodney Leon was chosen among 300 competitors from 83 countries. Costs ran up to a total of 1.7 million US-$.

The memorial was inaugurated on March 25th, the UN’s annual day of remembrance for the victims of slavery. The inauguration was the first major event of the „Decade for People of African Descent“ running from 2015 until 2024 – set aside to commemorate the contribution of people of African descent made to world history.

Finalists and the jury