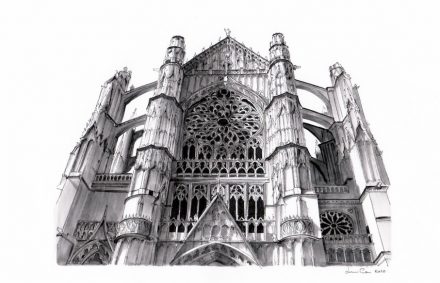 Lorenzo Concas is an architect, photographer and light designer based in Florence. He also sketches old cathedrals and other famous buildings that are intriguing in their richness of details.

A necropolis from Roman times has been discovered close to Carasso in Swiss Tessin. Its 30 graves were made of drystone walls covered with stone plates (German).

British producer of luxury items Visconti has pens with marble.

An overview of former slate quarries in Wales is given by a webpage. Author is Sean Adcock, a drystone waller and natural stone fan. We had recently reported about a book on the topic (1, 2).

„Volcanoes and Earthquakes“ is the title of a gallery in the London British Museum. Its famous earthquake simulator gives the visitor an idea what such a natural event is all about.

Vitória Stone Fair to be held June 05-08, 2018 in the capital of Brazil’s Espirito Santo state will again have a buyers’ club offering stone importers special services. 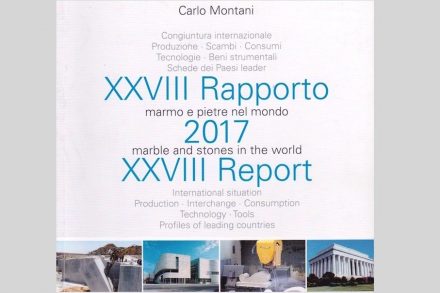 The current Statistical Yearbook by Dr. Carlo Montani „2017 Marble and Stones in the World“ can be downloaded as a pdf from the webpage. Previously 20 €, the price now is 50 €. It comprises 250 pages in two languages (Italian/English).

Made of hand-carved pink Georgia marble is the coffeetable created by Isamu Noguchi in 1948. The piece will be auctioned later this year.

Cosentino with its artificial stone Dekton acts as one of the sponsors of the Miami Open 2018 tennis competition (Spanish).

Adobe Stock company has granite pictures and other photos of natural stone for sale.

A warehouse worker in Long Island, USA was crushed to death by a large marble slab.

Menus bound in ultra-thin slate or wood are produced on demand by Austrian Reischl Company (German).

Fulgurite, vitrified masses in rock can ensue after lightning strikes the soil at temperatures as low as 1700 degrees C according to scientists at the University of Pennsylvania. Until recently it was thought that vitrification required much more energy.

Antique harbors 1: The port of Kyllene/Glarentza in Greek Northern Peloponnese has been investigated by underwater excavation to find the accurate location. Research was done in a scientific collaboration of the Ephorate of Underwater Antiquities and the Finnish Institute at Athens.

Antique harbors 2: An Italo-Iraqi archaeological mission has unearthed the ruins of a 4,000-year-old Sumerian port in Mesopotamia.

Iranian Rock Sanat producer of ceramic tiles invests in new sizes of up to 1600×3200 cm and has therefore bought a processing plant fro Italian BMR company.

Video of the Month: Jade Roller is a new beauty tool, said to work wonders on your complexion. We philistines wonder, if a rolling pin made of marble wouldn’t fill the bill as well (video, 1, 2).