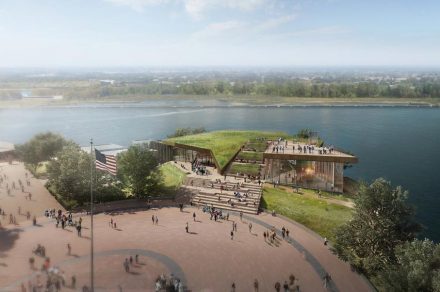 The new Statue of Liberty Museum on Liberty Island was opened to the public on May 2019. The building uses the same Stony Creek Granite which has been serving for the pedestal of the monument since 1874. The new museum offers several special experiences to learn about the history of the statue and what it stands for. US-President Trump did not participate in the opening ceremony (1, 2).

Sneakers made with millimeter-thin slate are a product idea by German companies Roxxlyn and Nat2.

Indiana Limestone company has launched its new Lite Core panel system composed of super-thin limestone, granite, or marble on an aluminum honeycomb backing and fiberglass. „Lightweight panels boast 60 times more impact-resistance than the solid slabs they are produced from,“ as said on the webpage.

A webpage tells the story how mysterious Edo Castle in Japan had been built in stone.

A prehistoric stone engraved with horse and extinct cattle about 14,000 years ago was found in France.

A new Highway Code in the Carrara region raises strong concern among stone transporters. The weight limit shall be reduced from 108 t to 86 t, and a limitation is planned for „unique and indivisible pieces“ (Italian).

During 2019, the Grand Canyon celebrates 100 years since it’s designation as a national park. 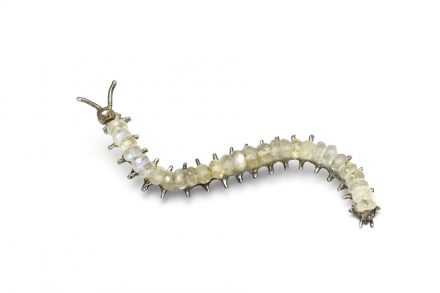 Sheila Cunha, jewelry designer from Brazil, now living in Italy and Sweden, uses minerals in some of her pieces. We show her millipede made of labradorite and silver.

The Triennal of Small-Scale Sculpture takes place in Fellbach, near Stuttgart, Germany until September 29, 2019. This year’s motto is „40,000 – A Museum of Curiosity“ referring to the ice-age artworks which had been found nearby.

The Piazza del Cinema in Venice was renovated and clad with Apricena stone, C+S architects report.

The Natural Stone University has a new course added which is titled „The Geology of Stone 1“. Participants learn about the history of natural stone, geological attributes to consider when specifying natural stone, and how to verify stone classification. The 6 hour course is available online free of charge for all Natural Stone Institute members.