Natural stone as a connector and accentuator for furniture design 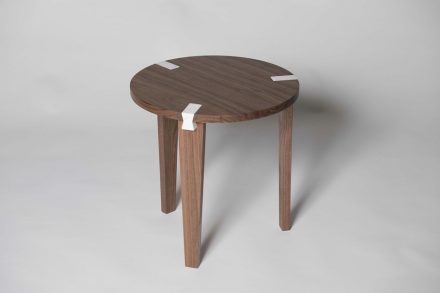 Design in natural stone must take the properties of the material into consideration as we have demanded repeatedly. Only then can stone serve the functionality of an object. Otherwise it is but much ado about nothing.

Let us undertake an exercise and pick two properties of stone at will.

E.g.: its hardness and its aesthetically pleasing appearance.

What can be achieved with these properties for furniture construction? 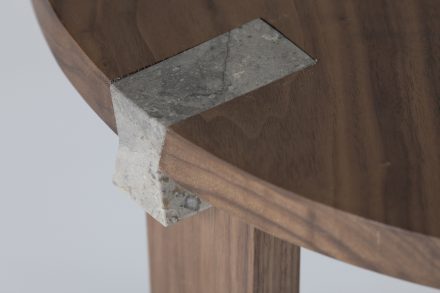 A well demonstrated answer came from Belgian Architect Olivier Vitry at the Milan Furniture Fair: his „Modular Tables“ can be easily assembled and disassembled whereby stone plays an incremental role.

A prototype was the wooden side-table, whose legs and tabletop are held together by means of dovetail joints.

The mechanism is self-explanatory.

A small detail which assists the mechanism’s function remains concealed under the tabletop. The stud is inserted at a slant causing tension and holding the pieces firmly in place. The legs must be inserted in the tabletop.

The principle works best with material that is not excessively hard, e.g. oak, combined with hard material such as marble.

The stone stud gives the piece an unmistakable accent and an air of elegance.

Vitry has fashioned the stud in aluminum as well – then the piece takes on an entirely different look.

The important thing is that the pieces must fit precisely into one another. 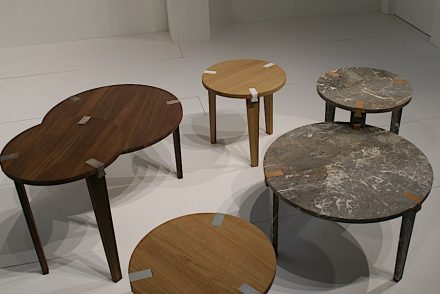 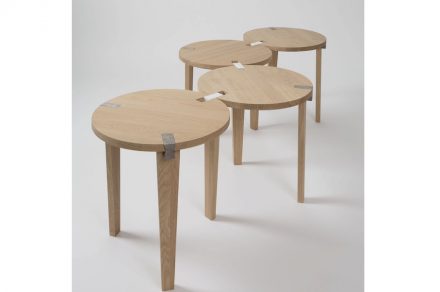 Together with the staff of Claisse Architectures, Brussels, the young designer is currently working on other implementations.