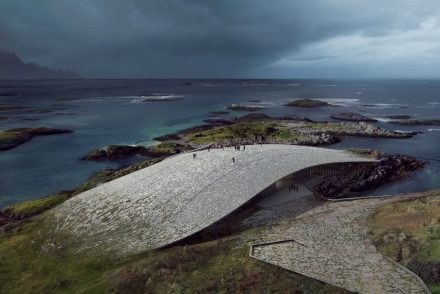 „The Whale“ is the name of a new tourist information center to be built on the island of Andøya, 300 km North of the Arctic Circle. It is one of the best places in the world for whale watching. Danish architects from Dorte Mandrup studio won the international competition with a shape with a roof covered with local stone.

Stone Sculptures will be shown until November 30, 2019, during the Kunstmaand of the Dutch island Ameland.

The Deep Carbon Observatory is an international research program aimed to better understand the role carbon plays below the Earth’s crust.

Melting glaciers reveal 5 new Russian islands in the Arctic. They now have to be named, authorities inform.

Spanish architect Alberto Campo Baeza has received the Medalla de Oro de Arquitectura, the country’s most appreciated architecture award. We had reported about some of his projects (1, 2).

„Lightbox” is the name De Beers gave its new brand of artificial diamonds produced in laboratories. The company entered this market to control it and to earn money, we had reported (1, 2).

The Geological History of Granite Mountain in Marble Falls and of Enchanted Rock between Llano and Fredericksburg is described in the DailyTrib magazine.

Cosentino Group and the Spanish Fundación Arquitectura Contemporánea launched a new global guide to contemporary architecture, under the name of C-Guide. It shall promote knowledge and recognition of the current architecture of excellence in the world.

„Great Walks” in New Zealand lead through some of the country’s most awe-inspiring landscapes like rugged mountain peaks, deep gorges and vast valleys.

Video of the Month: „Stoners“ is the title of a new campaign by Portuguese Assimagra association. It comprises two films, one short and one long, revolving around the phrase „We are Stoners, Slices of Infinity“. In a cryptic, even demonic way the longevity of the stones and their birth from the Earth is depicted (1, 2, 3).