On our list for the time after Covid-19: Bernini’s Fountain of Four Rivers in Rome 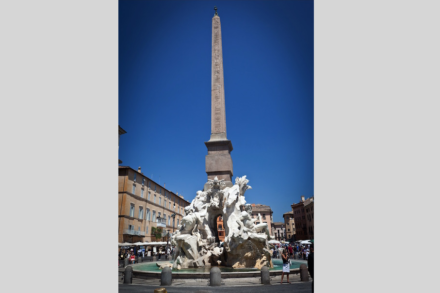 Gianlorenzo Bernini (1598-1680), also known as Giovanni Lorenzo Bernini, left his mark on sculpture like no other after Michelangelo. One of his trademarks was how he combined sculpture with architecture. This can be seen in his Fountain of Four Streams in Rome’s Piazza Navona. Depicted here is the then known world of the 4 continents using the example of their largest rivers: the Ganges, the Rio de la Plata, the Nile and the Danube.

Australia as the 5th continent was first entered by Europeans in 1606 by the Dutchman Willem Janz.

The fountain can be summed up in one word: it is great cinema.

In the middle of the basin it has a huge rock made of travertine with the 4 river gods on the sides and a 21 m high obelisk on top. By the way, the rock is hollow – which was a sensational construction for that time.

Water shoots out of this rock in streams everywhere – this was probably not only meant as a spectacle. Perhaps it was a kind of contemporary YouTube video clip as Bernini’s commentary on Athanasius Kircher’s explanation of the world at that time: the leading scientist at that time, in order to explain ebb and flow, had imagined the globe as hollow, allowing an exchange between the oceans on the surface and the seas in the interior. 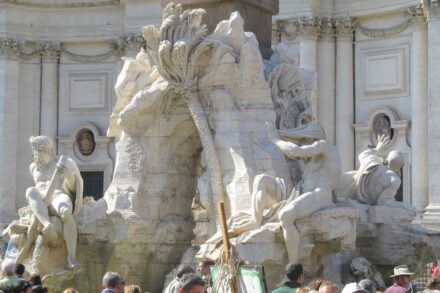 The fountain gave the perfect staging for it.

Kircher again appears in another place: on the sides of the obelisk there are 4 plates with Latin texts, and these are Kircher’s translations of the hieroglyphs on the granite of the obelisk.

The stone of the obelisk comes from the area around Aswan, but it was not hewn in Egypt. Rather, it is a Roman copy of a model from Pharaonic times, which had been buried near the Via Appia since ancient Rome, and which Pope Innocent X, who commissioned the fountain, had reused.

Baroque splendor is shown by the figures of the river gods placed on the sides of the rock: as in many predecessor fountains, they sit or lie there, lounging a little, and are surrounded by numerous details from which the viewer can deduce who is represented in each case: next to the Ganges, a majestic lion comes down from the rock to lap water; next to the Rio de la Plata, a few coins clink down, recalling the silver treasures of Latin America; next to the Danube, an untamed horse comes out of the rock, referring to the Hungarian prairie. 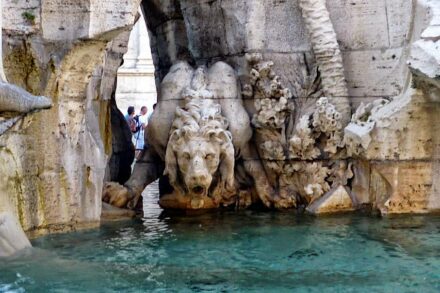 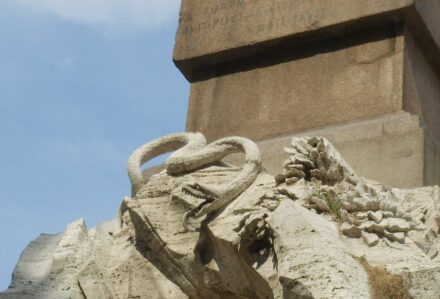 This is a really big show. One finds many strange fish, dolphins and sea snakes, preferably with their mouths gaping, but at the Rio de la Plata also a peaceful armadillo, which practically no one from Europe had seen at that time.

The dove at the very top of the obelisk carries a deep political message: it underlines that the Vatican, and with it the Christian faith, dominates the whole world.

The figures were created by the master’s collaborators: the Ganges by Claude Poussin (1651), the Rio de la Plata by Francesco Baratta (1651), the Danube by Antonio Raggi (1650) and the Nile by Giacomo Antonio Fancelli (1650). The rock itself was designed by Giovanni Maria Franchi (1648).

The Nile brings us to the final aspect of the Great Cinema listed here: the stories surrounding the artwork as such – Hollywood, that is, tabloids and social media.

Above all, it is about the elevation of the master Bernini in relation to his competitors, here in particular Francesco Borromini, who is given the role of the evil adversary.

For the God of the Nile has pulled a cloth over his head – wicked tongues smugly interpreted this to mean that the figure could not bear to look at a facade of Borromini directly opposite. In reality, we will reveal, it is represented that at that time the sources of the river were still unknown.

Or: in the first period after the commissioning, critics warned that the hollow structure under the obelisk must collapse. Bernini is said to have then stretched four thin cords in different directions from the dove downwards and scoffed that in reality it was these cords that held the whole construction together. 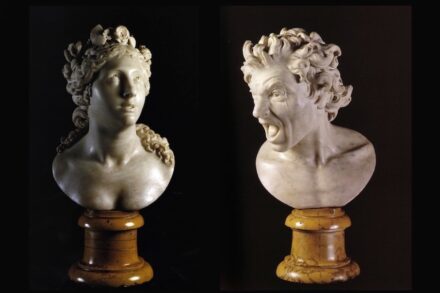 Curtain down, lights on and back to the present: recently, two of Bernini’s works were reinterpreted in a different context: the “Animas“, previously understood as representations of a blessed soul in paradise or the soul of a damned person in hell, are interpreted by a Spanish professor as a profane nymph or a satyr from ancient mythology.

And: in its “Expert Voices“ series, the auction house Sotheby’s has Margaret Schwartz, Senior Worldwide Specialist for European Works of Art & Sculpture, elaborate on Bernini’s significance for art: