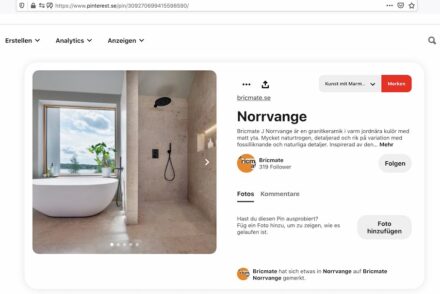 Until now, the motto in the country has been live-and-let-live, but the company is moving into dangerous territory with its “Granitkeramik“ trademark

A particularly vexing case of defrauding consumers by using false names exists in Sweden in the case of the Norrvange limestone there. Not only has the ceramic manufacturer Bricmate been marketing one of its products under this name for some time; in September 2020, the company also had the name Norrvange protected by the relevant EU department.

Let us delve a little deeper into this Scandinavian country of about 10 million people with a strong consensus culture that is hard to find anywhere else.

One of Sweden’s geological trademarks is the limestone from the island of Gotland, which has been an export hit for many years and can be found in many buildings around the Baltic Sea.

One variety is the one from the Norrvange quarry not far from the town of Lärbro. The quarry is operated by the company Slite Stenhuggeri.

For several years now, Bricmate has been using the name Norrvange for one of its ceramic varieties. Incidentally, it did the same with the name of another stone of national importance, the Kolmården marble.

Slite Stenhuggeri had protested against this misuse of the name, and the natural stone association Sveriges Stenindustriförbund had also intervened, but no legal action had ever been taken. In Sweden one strives for consensus, as said, and finally one sees a name as for example Kolmården as a national property, which no private person and no company should make itself too own. After all, an entire region carries this name.

Now, however, Bricmate has abandoned this restraint and has had the name Norrvange protected. As can seen on the website of the European Intellectual Property Office, the application was filed at the beginning of June 2020, and the registration took place at the end of September.

In the meantime, there has been correspondence between the lawyers of both companies. Bricmate is keeping a low public profile on the matter; it did not respond to an inquiry from Gotland Island’s local radio, Peter Willebrandt, editor-in-chief of the association’s quarterly magazine “Sten“ (Stone), tells us. 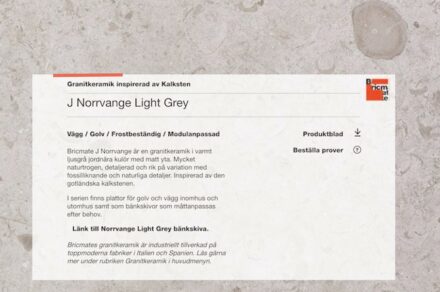 Presumably, however, the ceramics manufacturer is not aware of the storm it can raise with the protection of the stone’s name. The company has given its products, which imitate natural stone, the generic title “Granitkeramik“ (see photo above). This makes the matter exciting, because: on July 14, 2017, the European Court of Justice (ECJ) had ruled , that such fancy names are prohibited in the territory of the 27 states.

In that case before the highest EU court in Luxembourg, it was about designations such as “vegetable butter“, which a manufacturer had given his products. The judges clarified that butter and cheese, or milk always come from animals and never from plants, so that a combination of both terms can only mislead the consumer.

It is the same with Bricmate’s “granite ceramics“: a granite can never be a ceramic, because the natural stone was created by nature, not by man.

Slite Stenhuggeri has also reported cases where customers had been deceived by the Norrvange name of the ceramic product. 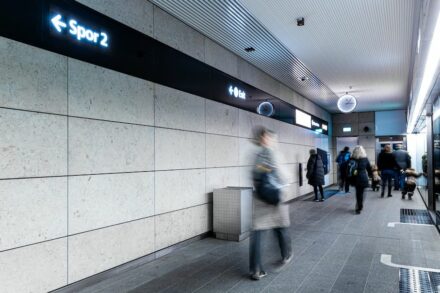 Stone of the year in Sweden

Incidentally, the limestone from the island of Gotland was named Stone of the Year 2020 by the association. It was formed around 400 million years ago, when Sweden was at the height of the equator. The starting point was coral reefs, around which shells of mussels and marine animals were deposited.

Gotland was the center of natural stone extraction in Sweden as early as the Middle Ages. “Stone is literally the material of the region’s building history,“ says association chairman Kai Marklin. Today, exports to neighboring Denmark account for one-fifth of production at Slite Stenhuggeri, which has operated the Norrvange quarry since the late 1950s. In Denmark’s capital Copenhagen, for example, the stone can be found in one of the train stations on the Ring Line.

The 400 or so mysterious picture stones on the island of Gotland are also made of the local limestone. 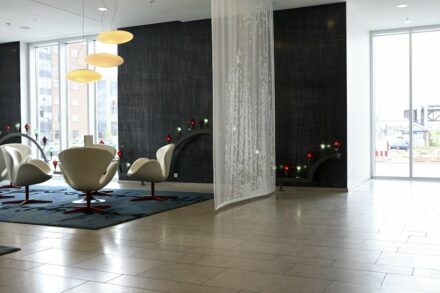 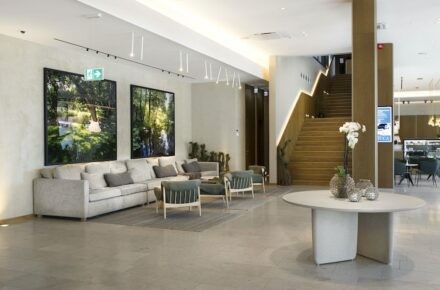