Mies van der Rohe’s idea of a “universal space“ almost in its pure form: in Berlin, the Neue Nationalgalerie has been thoroughly renovated and inconspicuously modernized 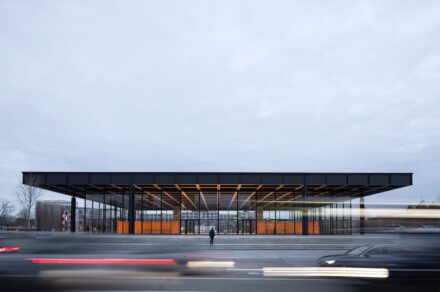 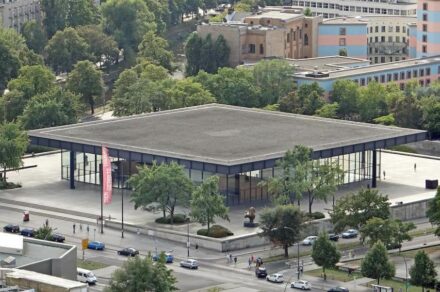 People who are not already enthusiastic about architecture usually don’t know much about Mies van der Rohe’s famous Neue Nationalgalerie in Berlin at first glance: faced with descriptions such as “Temple of Modernity“, they are usually disappointed by the single-story building with glass walls and a steel roof, as inconspicuous as it is on the edge of the Kulturforum with the Philharmonic Hall, the State Library, and the Gemäldegalerie next to it.

So where is the architecture in the case of this icon of construction, built from 1963-1968? And immediately another question: where are the traces of the general renovation that took place since 2006, carried out by a current architect also with a great name, David Chipperfield?

The two go together: Mies had realized his idea of a “universal space“ almost in its pure form in the building: it was to be a low hall without supports, in which any kind of use would be possible due to its spatial generosity. He accepted that his design work would thus be practically invisible. 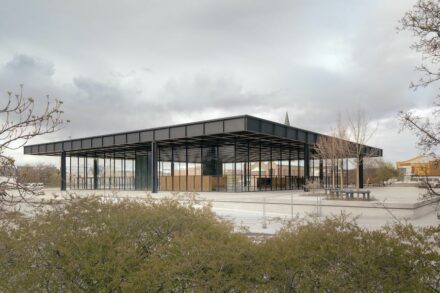 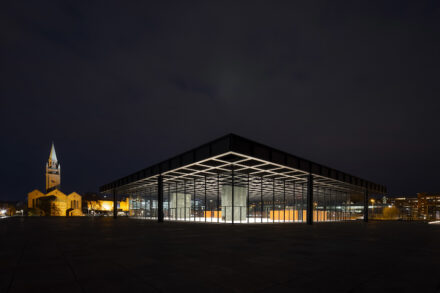 David Chipperfield and his collaborators, for their part, took this concept and submitted to it, making the building fit for modern use but leaving no discernible trace of their work. Chipperfield rues this in the press materials: “Taking apart a building of such unquestionable authority has been a strange experience but a privilege. The Neue Nationalgalerie is a touchstone for myself and many other architects. Seeing behind its exterior has revealed both its genius and its flaws, but overall, it has only deepened my admiration for Mies’ vision.“ he and his team saw themselves as “invisible architects”, according to the documents.

We would like to add here that all parties involved expressly and almost effusively praise the cooperation with the Chipperfield office. “The quality of the teamwork“ convinced him, said Arne Maibohm, project manager at the responsible Federal Office for Building and Regional Planning, during a press tour. “With projects like this, you need a strong facilitator.“ Sometimes difficult compromises had to be found between the many parties involved.

We would like to mention just a few of the special tasks involved in the basic renovation:
* today, the Neue Nationalgalerie can attract 7,000 visitors in one day during successful exhibitions – Mies had planned a checkroom with 80 hat racks for the requirements of the time;
* space had to be created for the requirements of today’s event culture, i.e., more room for the bookshop and for merchandising;
* last but not least, the technology: for example, the glass panes in the façade had to be thermally separated from the steel posts to avoid cracks in the glass in the future; provisions also had to be made for the event that skaters would drive into the glass;
* and then the usual: a lot of asbestos had to be removed, energy-saving technology and thermal insulation had to be installed, barrier-free access had to be ensured, and much more.

This is described very clearly and in detail on the webpage Neue-Nationalgalerie-Elements (see link below). We want to limit ourselves to the aspects around natural stone.

In a separate text in our series Stone Detail we will briefly discuss the “Mies’ corners“.
https://www.stone-ideas.com/86494/neue-nationalgalerie-berlin-mies-corner/

In contrast to the quasi-materialless outer skin of glass, Mies used natural stone in many places. He was very familiar with it because his father was a master stonemason at the Aachen Cathedral Building School.

Granite was used above all, and there is also a spectacular accent with marble. 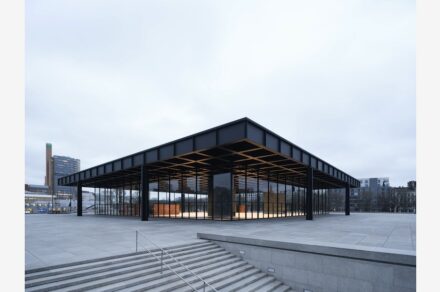 Striegauer granite is found around the outside of the building and on the wall in the sculpture garden. The fact that this variety was used is related to a curiosity of history: “The material was used at that time because the neighboring country Poland was in payment difficulties and supplied the city of Berlin with stones instead of foreign currency,“ says the web page.

On the terrace, numerous granite slabs showed severe damage. “After the slabs had been bedded on coarse river gravel during a renovation measure in the 1980s, numerous breakthroughs, break-offs and cracks occurred,“ the webpage informs. 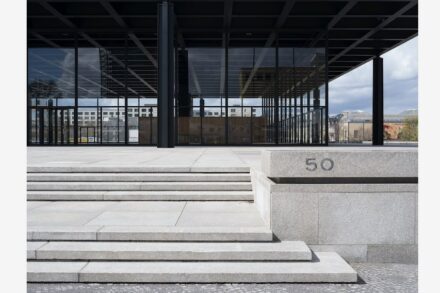 The same granite is also found on the cladding of the concrete base around the building. It is considered an architectural monument as it bears one of the first ventilated natural stone façades installed in Germany. As elsewhere in the refurbishment of the building in keeping with its status as a historic monument, the greatest attention was paid to detail: “Static and thermal verification was also required to reconstruct the original anchors, which were standard flat anchors with a very narrow web thickness. As a result, the joint was restored to a width of 6 mm, in keeping with the joint used during the original construction.“ 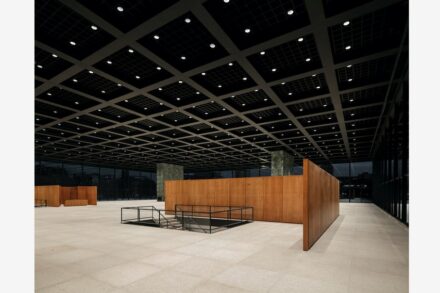 The flooring in the exhibition halls above and partly below is covered by Epprechtsteiner granite from Germany. Here, the slabs showed hardly any damage even after 50 years. Even when it came to renovating the underfloor heating and the slabs had to be taken up, there was hardly any breakage.

Now the hall not only has state-of-the-art heating, but also cooling. The large storage mass of the floor due to the natural stone covering helps to achieve a constant indoor climate with low energy consumption.

A total of 14,000 granite slabs were cataloged, recorded, temporarily stored and finally reinstalled in their original place. 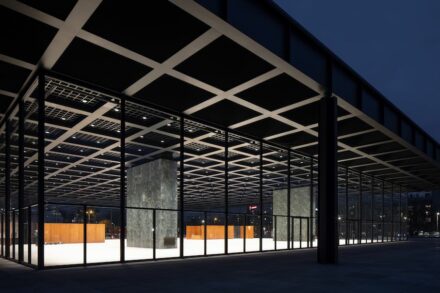 A deviation from the idea of a column-free universal space are the two utility shafts in the upper hall. They appear as if they were supporting the roof, but inside they hide only the pipes for air conditioning, electrical and rainwater downpipes. The roof rests solely on the 8 steel columns placed on the terrace around the building. By the way, the roof was completely pre-assembled on the ground and then lifted by hydraulics and placed on the columns. 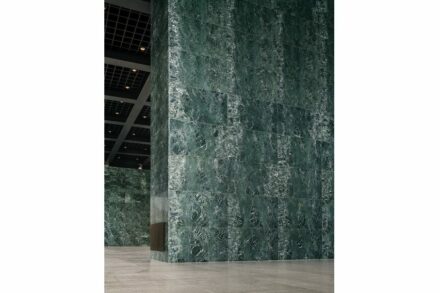 Mies did not try to hide the two supply shafts, even though they demanded a departure from the universal space: they are clad room-high in green marble from the Greek island of Tinos. Raw slabs without predominant lines in the structure were chosen. In the end, however, they were arranged so that there are continuous lines from the roof to the floor.

Some more details:
* in the basement you can travel back in time: the toilets have been restored in the original style of the 1960s; for this, the washbasins were reproduced by the manufacturer Lauffen based on the descriptions from the company’s archives; the small wall and floor tiles also bear witness to that period. Throughout the building, the switches, buttons and sockets were reconstructed; 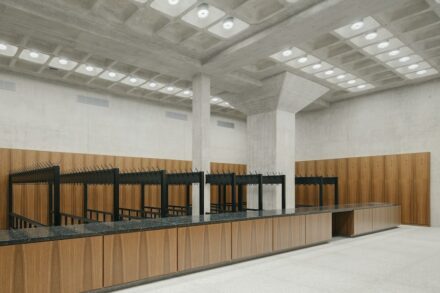 * an idea of the weight of the roof (about 1200 t) can be seen in the newly created checkroom in the basement: one of the concrete pillars is exposed there, on which one of the steel columns for the roof rests above it. The countertop in the checkroom is made of Labrador granite, as was previously the case in the – formerly much smaller – checkroom on the upper floor.

The total cost of the renovation was €140 million. This was €30 million more than planned. The opening was delayed by a year. 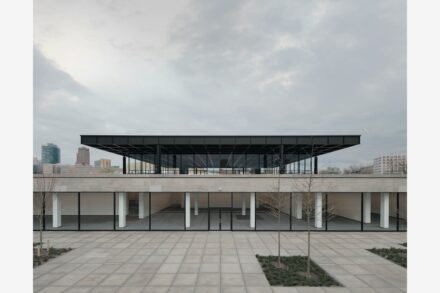