Combined use of 3D scanning and CNC: for sculptors and natural stone companies, opportunities open up for new products and novel works of art 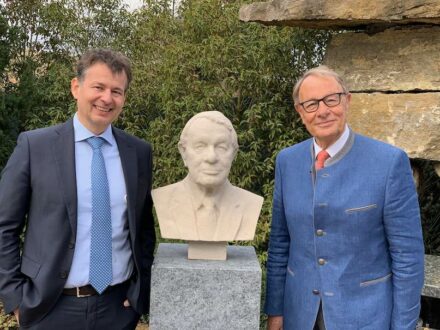 Examples from Italy, Spain and Germany show how the creatively inclined are already taking advantage of the great opportunities offered by modern technologies

There is news from Germany regarding the use of CNC machines, which has now led to new types of natural stone products. Similar developments have taken place in Italy, but there they have mostly been limited to the field of art. We had recently reported on a project from Spain.

In Germany, it involves the creation of stone effigies of people using 3D scanners and CNC machines. The most recent example is shown in the photo above: it depicts Joachim Grüter, the long-time president of the natural stone association DNV. The idea for the work came from Hermann Graser Jr, the new president of the association and one of the heads of the company Bamberger Natursteinwerk Hermann Graser.

The company has often put such ideas into practice, developing 2 categories: 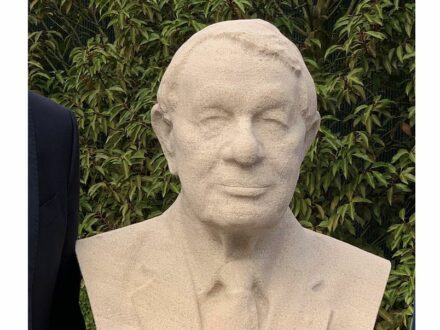 * in a “bust“, a person is digitally scanned by a 3D scanner. Based on this data cloud, the machines produce a stone bust, which, as can be seen in the photo, has only rough surfaces. This is intentional and should be understood as a special design feature. It should be noted that the bust is enlarged compared to the original;
* in the case of a “portrait“, more detail is sought, and there are therefore a few more work steps: first, a sculptor makes a plaster model after the person, based on which the scanner creates the data cloud. The CNC machine uses this to create a rough version of the image. Finally, the sculptor steps in again and does the fine work, for example on the haircut or the wrinkles in the face or clothing.

There is already a good demand for the “busts“, confirms Nina Graser, head of communications at the company and wife of the junior head. The Bamberg natural stone plant has already completed a number of such orders, for example for companies that wanted to honor their founders and erect busts of them on the company premises.

In Italy, there has already been a full-body job by Scan and CNC: when the 500th anniversary of Leonardo da Vinci’s death was celebrated in 2019, the magazine National Geographic commissioned the company Tor Art from Carrara to copy a statue showing Leonardo himself. It is the sculpture created by Luigi Pampaloni in 1842, which stands in a niche in the Piazzale degli Uffizi in Florence.

In Italy, industrial designer Raffaello Galiotto has already used robotic arms with water jets or wire saws as sculptors. In 2018 and 2019, he showed the presentation “Percorsi d’Arte“ (Ways of Art) at Marmomac. On display in Hall 1 of the fair were sculptures in which the idea came from the artist, and he participated in the programming.

In Spain’s province of Andalusia, applauding hands made of marble were recently installed as a reminder of the Covid-19 solidarity.