Citizen solidarity in response to Covid-19: eight sculptures of applauding hands made of Macael Marble were installed in Andalusia 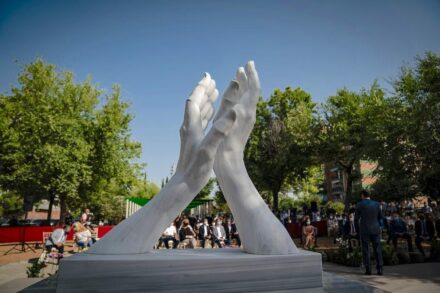 The works of art are a reminder of the applause that people gave professionals in hospitals, among others, in the fight against the pandemic

Flashback: about 14 months ago, when the first horror reports about Covid-19 raged through Europe, followed shortly after by reports from Italy that, in response to the lockdown, people were standing on balconies in the evening and singing and making music together, at a distance. The idea quickly found imitators across the continent, and then there was a new stage when citizens applauded hospital staff from their balconies in the evenings for confronting the dangerous virus without being vaccinated themselves.

In the meantime – at least in Europe and the US – the worst seems to be over and vaccinations are moving forward.

In Spain, the regional government of Andalusia has now launched an initiative to commemorate the cohesion of the population at the time: sculptures showing hands applauding are being erected in 8 towns in the province.

Explicitly, the documents about the action do not only mention the professional staff in the hospitals. The sculptures ultimately tell the story of all those who, despite the threat to their lives posed by the pandemic, undauntedly pursued their activities, whether at work or in private. 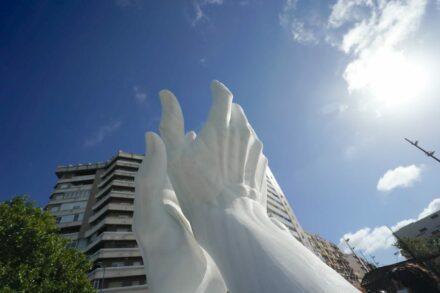 The works of art were realized again in an act of public spirit: the idea came from the regional government, the sculpture was created without fee by the sculptor Navarro Arteaga, and material as well as production came – also free of charge – from companies of the natural stone association AEMA (Asociación de Empresarios del Marmól de Andalúcia). The material is the native white marble Blanco Macael.

The press officer Gloria Carrillo Sánchez states in a report in the magazine of the association “Mármol, Architecture & Design” (June 2021) the purpose of the action: they wanted to create “the lasting footprint in Andalusia and its cities, of solidarity and professionalism.”

The applauding hands are almost 2 meters tall. Their shape contains a lot of symbolism: together they form an “A“, the first letter of Andalusia, and they point to the sky. However, their expression is not that of asking for help, but – rather or also – of self-confidence, because of what has been achieved. 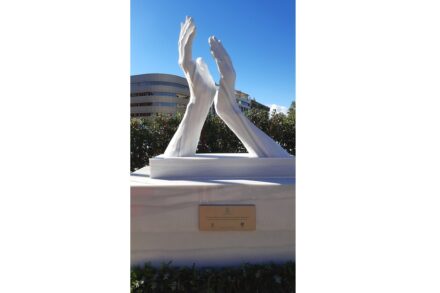 The modern technology of the natural stone industry was used: the clay model of the artist was scanned three-dimensionally, and this data cloud was fed into a robot arm with a diamond wire. The machine converted the model enlarged into stone. The work, which, according to the report, was only “70 to 80%“ completed to this point, was further finished by hand by stonemasons at the marble companies to get the desired surface in which human hands could be recognized.

“With this project, the Macael Marble Brand showed not only its local material, but also its great production capacity and know-how,“ writes Gloria Carrillo Sánchez.