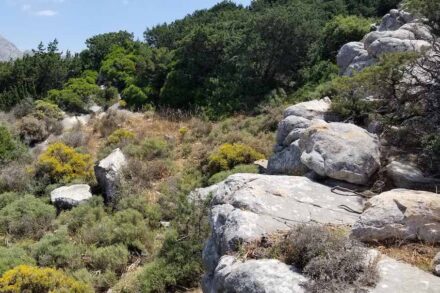 The source of marble for a statue of Apollo on the Greek island of Delos has been a mystery to art historians and archaeologists for decades. The stone’s chemistry pointed geochemists to the southern end of the nearby island of Naxos, but no one thought had been large ancient marble quarries in that region of the island. “We had actually been told that we were not going to find what we were looking for,” says geoarchaeologist Scott Pike of Willamette University. But after two field seasons traipsing across Mediterranean shrublands, Pike believes he has found the source.

Naxian marble was a prominent material for sculpting in the past and is still quarried today. Its surface is slightly transparent, which gives statues a special shimmer.

The Greek Archaic period (approximately 800 to 480 B.C.E.) is known in part for its “larger-than-life” kouros statues, which depicted young men. Together, the massive Apollo kouros on Delos would stand around ten meters (33 feet) high, although today it is broken into several parts. The massive marble chunks are white and worn; at a glance, some of the pieces hardly resemble parts of a human figure. But the statue has drawn researchers all the same. Searching for its source was sparked in part by an ambiguous inscription at its base, roughly translated as, “I am of the same stone, statue and plinth,” with a later addition stating that the kouros was “from the Naxians, to Apollo,” according to Pike.

It was not clear whether the inscription referred to the statue’s structure, being hewn from a single piece of marble, or the origin of its stone. Pike sampled various parts from the statue — a hand, the upper and lower torso, a bit of leg — and analyzed its carbon and oxygen isotopic composition. That composition can be used to trace the marble source by comparing it against other analyzed marbles, like finding a fingerprint match in a database. 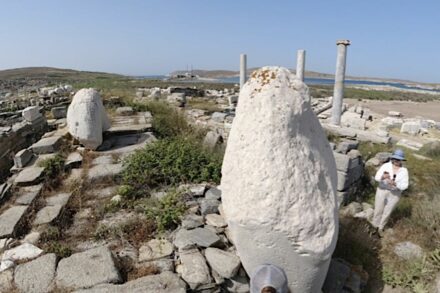 Pike headed to the southern side of Naxos, despite locals assuring him his efforts were in vain. He relied on local knowledge of other archaeological sites and geologic maps to guide him as he “scoured the landscape” looking for, essentially, outcrops of white marble and possible small pits. Remnants of Archaic quarries bear little resemblance to the vast open-pit mines humans create today and were difficult for Pike to find.

After a couple of weeks of searching, Pike began finding small bands of white marble that were not marked on the geologic maps. Some were close to archaeological sites, giving Pike confidence that these small quarries could be the source.
“Finding what we were looking for was exciting because being told several times that you’re not going to find anything is discouraging, but we knew,” Pike says. “The evidence pointed to the south. I felt the most Indiana Jones I’ll ever be.” 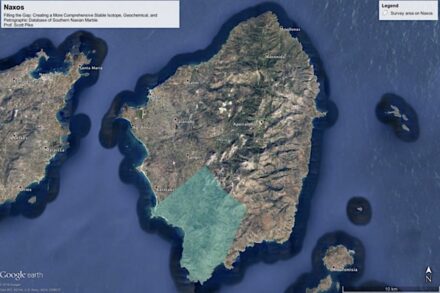 Back in the lab, Pike analyzed his marble samples and found that two of the newly-uncovered southern white marbles were good matches for the Apollo kouros at Delos. Knowing that these early marble quarries exist in the south of the island will be helpful for tracing the source for other ancient marble artifacts, such as older Bronze Age Cycladic figurines that have puzzled geoarchaeologists. It also has implications for knowledge of commerce at the time.

“Knowing now that there is a marble source on Naxos for these Bronze Age statues and figurines will place the region more in the center of commerce, trade and influence than had been previously understood,” Pike says.