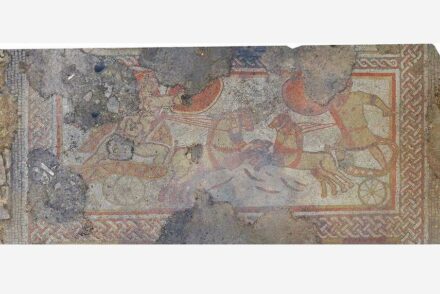 The artwork in 3 parts, which had been the floor of a large dining or entertaining area in a villa, features Achilles in his battle with Hector at the conclusion of the Trojan War

Archaeologists have unearthed the first Roman mosaic of its kind in the UK. The initial discovery had been made during the 2020 lockdown, and since November 25, 2021, the complex located between Ketton and Stamford in Rutland in the East Midlands is protected as Scheduled Monument by DCMS on the advice of Historic England.

The remains of the mosaic measure 11 m by almost 7 m and depict part of the story of the Greek hero Achilles. The artwork forms the floor of what’s thought to have been a large dining or entertaining area.

Mosaics were used in a variety of private and public buildings across the Roman Empire, and often featured famous figures from history and mythology.

However, the Rutland mosaic is unique in the UK in that it features Achilles and his battle with Hector at the conclusion of the Trojan War and is one of only a handful of examples from across Europe.

The mosaic is part of a large villa building occupied in the late Roman period, between the 3rd and 4th century AD. The villa is surrounded by a range of other buildings and features revealed by a geophysical survey and archaeological evaluation, including what appear to be aisled barns, circular structures and a possible bath house, all within a series of boundary ditches. 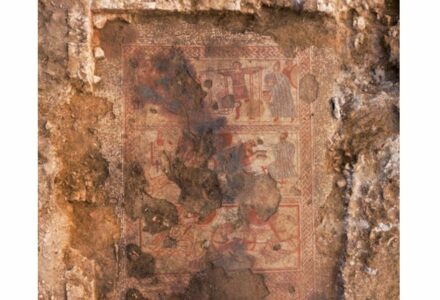 The complex is likely to have been occupied by a wealthy individual, with a knowledge of classical literature.

The villa complex was found within an arable field where the shallow archaeological remains had been disturbed by ploughing and other activities. Historic England is working with the landowner to support the reversion of these fields to a sustainable grassland and pasture use.

In collaboration with the University of Leicester and other stakeholders, Historic England is planning further excavations on the site for 2022.

The site is on private land and not accessible to the public.

Discussions are on-going with Rutland County Council to explore the opportunity for an off-site display and interpretation of the villa complex and its finds.