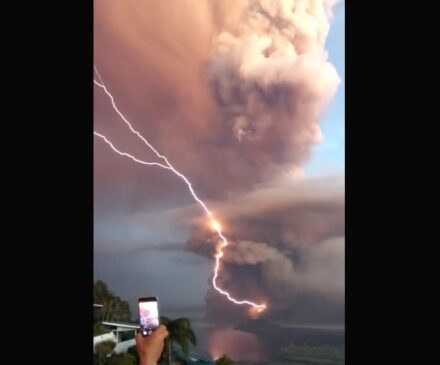 During the Hunga Tonga-Hunga Ha’apai volcano eruption on the Pacific island of Tonga on January 15, 2022, there were violent flashes for hours at the lower edge of the ash cloud. The phenomenon is known and is examined in detail in a report in the Geological Society of America’s magazine “Geology“ based on the eruption of the Taal volcano in the Philippines in 2020. Also described is strong sparks (blue streamers) in the ash cloud, which are discharges of cold plasma. The photo on top is from the Taal eruption in 2020. The video below shows the Tonga volcano taken by NASA Earth Observatory, courtesy of the Japan Meteorological Agency.

On the web page UseNaturalStone the Natural Stone Institute (NSI) has published a report comparing porcelain tiles’ manufacturing impacts with such made of natural stone. Companies can download the complete text plus graphics and use it for their promotion.

The Smithsonian Magazine informs about a book telling the complicated story of how the Elgin Marbles came to England.

In the city of Huelva, Spain, the thumb of a marble statue showing applauding hands was broken off. There are 8 such statues in Andalusia commemorating the fight of public workers against the Covid-19 pandemic (Spanish, 1).

The British Society for The Protection of Ancient Buildings (SPAB) tells the story from new year’s eve 1900 when an upright and a lintel at Stonehenge fell down.

In Pakistan’s Peshawar province, exploration for marble and mineral resources is a big topic.

gmp architects’ design for the Berlin Brandenburg Airport was awarded one of the Prix Versailles 2021 (1, 2).

In Maine, the citizens of a 600 residents village on the Penobscot River are against a new quarry.

The usage of the green slates from the Spanish Lugo region as material for construction over centuries is described in the new book “The Relevance of the Green Phyllites of Lugo (Spain) in the Architectonical Heritage: an Exceptional Roofing Slate Resource“. In the abstract is said, “the stone is a good candidate for the designation as a Global Stone Heritage Resource“ (1, 2).

A marble statue of a woman which may depict Hygeia, the wife or daughter of the ancient Greek god of medicine, Asclepius, was found at the site of ancient Epidaurus, a center for healing in ancient times.

Video of the Month: “Yoga between slabs – reconnect yourself to nature“ is the title of a video on the Mexican company Rochstone’s web page. The exercises with Yoga master Beatriz Herrera are to help spectators to better get along with a lockdown, as said in the text (Spanish).