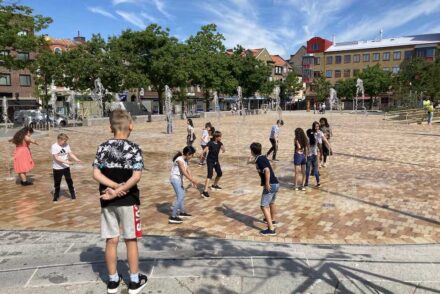 Stora torg, the central square in the small Swedish town of Eslöv, is a prime example of how the center of a town can be made attractive with different materials and a touch of architectural slight of hand. The square, with an area (115×65 m) of roughly a soccer field, has always had a closed perimeter, as is familiar from the much-admired squares in Paris or Italy. But it became dated and was no-longer attractive for the citizens.

In a call for tenders, the city administration was looking for improvements. On the one hand, the aim was to give citizens the feeling that Stora torg was a central point of contact outside their own homes. On the other hand, the square should also become known beyond the borders of Eslöv. After all, the town with a population of around 30,000 sees itself overshadowed by the nearby centers of Helsingborg and Malmö.

60 million Swedish kronor was invested in the redesign of Stora torg, the equivalent of about $6.6 million. The architects from Sydväst, namely Niklas Bosrup and Tobias Starck won the contract. The project was nominated for one of the Swedish Natural Stone Awards 2021.

In the unusual size of the square and its room-like enclosure, the architects saw great opportunity for the redesign. The basic idea of their concept was to define individual areas for specific uses within the area – but without separating them from one another.

The guiding principle was to make the ensemble recognizable as a unit on the outside while promoting diversity on the inside.

To achieve this, they used differences in height, different floor coverings, as well as trees and plants.

The defining color on Stora torg is yellow. It comes from the paving of bricks. Zones have been separated by the type of paving: the herringbone pattern that exists in the adjacent streets is continued along the edges of Stora torg.

The fact that the architects chose yellow as the color for the paving is related to the location: Eslöv once had a significant brickyard, and the fields around it grew a lot of rapeseed, which is known to cover the landscape with wide expanses of yellow when in bloom.

We will explain further design ideas with the help of the following graphic: 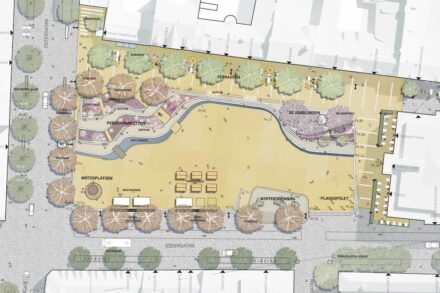 * from top to bottom, the slope is naturally about 1.5 meters. The architects have taken advantage of this to create a quiet zone at the top, where you can sit on benches and watch the activity in the lower part. The Kejsarlunden at the top right is used as a kind of spectator box: here you can sit comfortably as if on a balcony. A little below, there is a wooden floor where young people can sit or lie down; 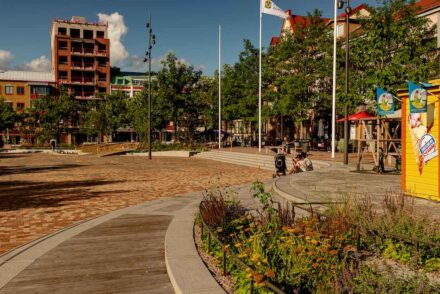 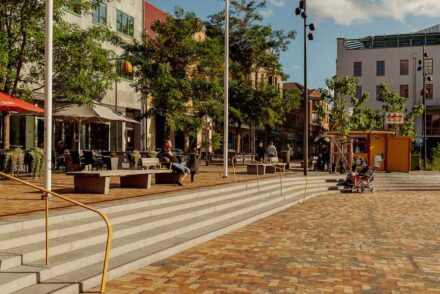 * striking are the curved steps leading down. The granite Tossene Grå Bohus is the perfect material for them. Narrow strips of black diabase are inlaid in the granite as a warning against the danger of falling; 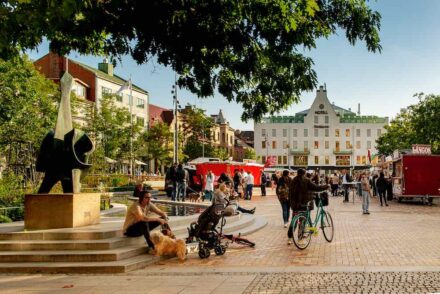 * the watercourse enlivens the scenery. Chunks of diabase are inserted here as if there were rapids;
* other areas on and around the square are intended for market stalls, food trucks and snack stands, for example. One zone gives the impression of a stage – it can become a Speakers’ Corner or an opportunity for other forms of expression. 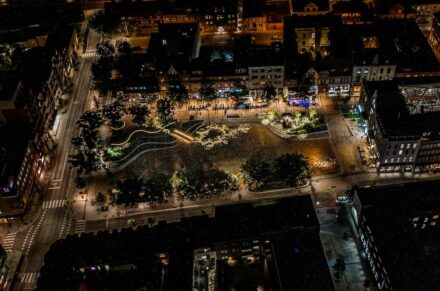 It was important that the largest part of the area remains open. In this way, the architects wanted to make the square a “space of possibilities,“ as one description puts it.

Many details were part of the redesign: for example, a special streetlight, the “Eslöv lantern,“ was developed to cast a homey light. The street furniture that was purchased, for example the benches, got instead of the original steel feet those made of granite, in order to connect them again visually to the stone areas of the square and also to the buildings around it.

The stone was supplied by Hallindens Granit and Sjöströms, and Zaar Stone did the paving work.