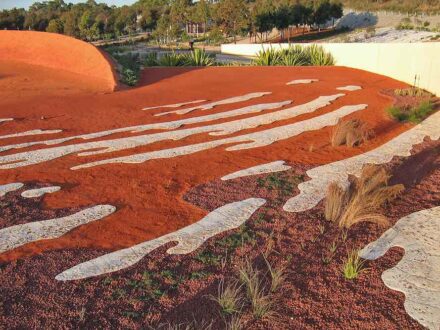 The compilation shows what is known from elsewhere, but also gives food for thought for innovative ideas

Victoria State government has published a brochure that looks at the history of the most popular recreational areas there. “The New Lives of Old Quarries“ is the title of the booklet, which uses nine former quarrying sites for natural stone or crushed stone and sand to show how these sites are used today and what role the materials from there played for many generations.

Insiders will not find anything that is not familiar from elsewhere, such as the former quarry as a place for festivals in front of a high rock face or as a recreational park with zones for sports, hiking, or children’s play. New nature parks are created everywhere in large gravel quarries today.

However, the brochure gives a nice overview and from individual examples, one can derive inspiration where the search for ideas for new uses can begin.

One such example is the Royal Botanic Gardens Cranbourne, about 50 km from Melbourne. The sand was formerly extracted there in large quantities for the construction industry. The new nature park has put sand at its center.

Cranbourne sees itself as a “native annex“ of the Melbourne Botanic Gardens and revolves around the flora of the fifth continent: among other things, there is a Eucalypt Walk and the Gondwana Garden.

But that is not all: at the center of the site is the Red Sand Garden, which is all about the landscapes of Australia’s interior. ’Ephemeral Lake’ is the name of a land art there with red soil and ceramic artwork (see photo above).

Art also serves as ambassadors from the past at All Nations Park in Northcote. Numerous sculptures tell of the fact that clay was once mined on the site of what is now a Multi-Use Park. 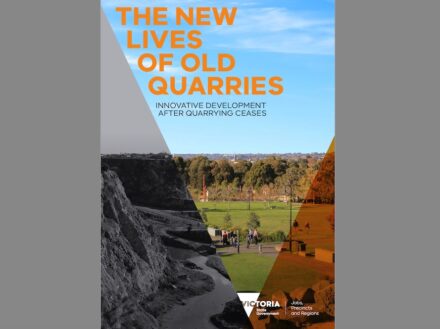 History also plays a vital role at Coburg Lake Reserve in Coburg. The basalt Bluestone was formerly mined there, at times in a total of forty-one quarries. Prison inmates worked and extracted the stones from which the Pentridge Prison with the high walls around it was built. Today in the park there is a special wall of semi-finished stones and numerous retaining walls made of the material. An avenue of 164 trees commemorates those who died in World War 1.

Fitzroy Gardens, on the site of Melbourne’s oldest quarry, is designed entirely in the style of the Victorian era, when settlers migrated from England and brought their native culture with them. Wide lawns and promenades dominate the scene.

A special visitor attraction there is Cook’s Cottage, which commemorates the navigator and explorer James Cook: it was built in 1775 by Cook’s parents in Yorkshire, England, transported stone by stone to Australia in 1934, and rebuilt there.

A completely different concept was realized in Maribyrnong about eight km from Melbourne’s city center: there, in an extensive former gravel quarry, lies the Highpoint Shopping Centre. It is one of Australia’s most successful business centers, with annual sales of around 1.2 billion Australian dollars.

“The New Lives of Old Quarries“