In the Chinese province of Zhejiang, 9 former quarries have become a tourist attraction 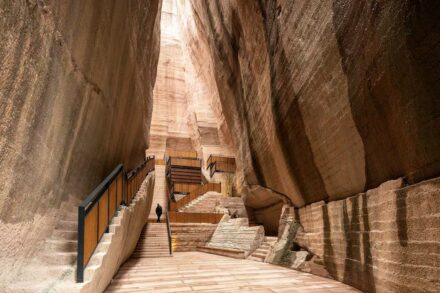 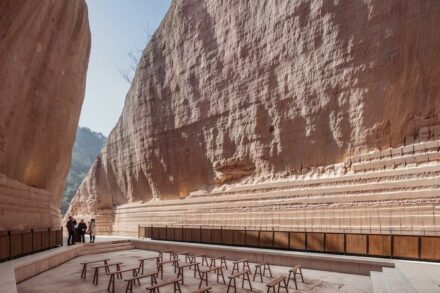 A band of 9 abandoned quarries has recently become the tourist attraction in an economically weak and hard-to-reach region in Zhejiang Province in China. Tuff has been mined there for some 1000 years, creating spectacular cuts in the mountains and equally spectacular caves. They now provide a new livelihood for the people there.

This is industrial culture as we know it from elsewhere: evidence of past times is preserved and put to a new use. Here, the concept comes from architect Xu Tiantian, head of the DnA_Design and Architecture office based in Beijing. She had already worked successfully elsewhere in China with her method of “Architectural Acupuncture.“

The authorities in the region supported the quarry project. The aim was also to counteract the rural exodus in China. 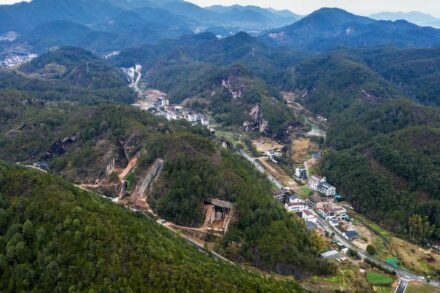 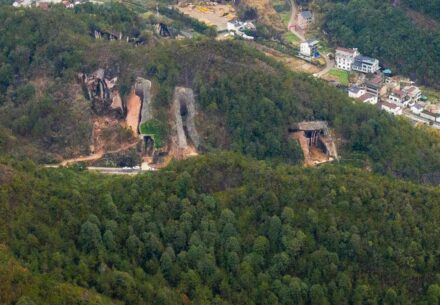 The photos provided by the architect give an idea of the special nature of these quarries: Some of them are canyon-like cuts in the mountain; they are several 10 meters high, but only a few meters wide. Another example is a huge hall whose dimensions are reminiscent of a cathedral.

Unlike in other quarries, the exploitation here did not aim at the largest possible raw blocks, but at ashlars of – estimated – about 50 cm in length and 30 cm in height. These were used to build solid houses throughout the area in Jinyun County, Zhejiang Province. 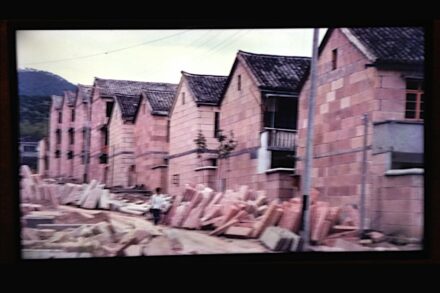 A photo from a video shows such buildings.

This peculiarity of stone quarrying also posed special challenges for the current project. For even now, no large machines could be brought into the quarries – as always, most of the work remained manual, carried out by the locals.

In the meantime, many of them have become tourist guides or work in the catering industry. A hiking trail connects the nine selected quarries out of a total of about 3000 in the area. It leads around a village where an information center is planned. An educational center for natural stone processing is also to be built.

Tourists see nothing of the measures taken to secure the terrain for the new use. But the aerial photos show how rainwater is drained from the top of the canyons or how a layer of concrete with steel mesh makes the top layer of rock weatherproof. 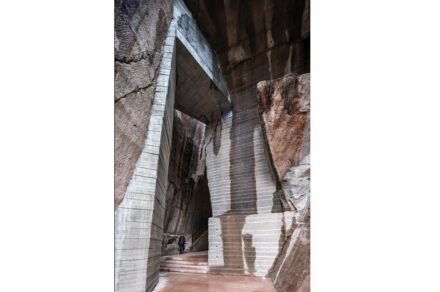 Where protections had to be inserted inside the fractures with concrete walls, these take on the structure of the natural stone walls, but differ significantly in color.

Experts from nearby universities were also involved in the concept. They developed the concept for the lighting – actually, in the case of the canyons, the floor is plunged into darkness. 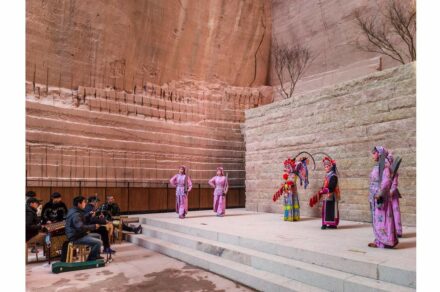 For the large hall, an acoustic concept was developed that takes advantage of the special surface of the tuff and its reflection. Concerts are held there, even performances of Chinese operas, and these are also open to locals. 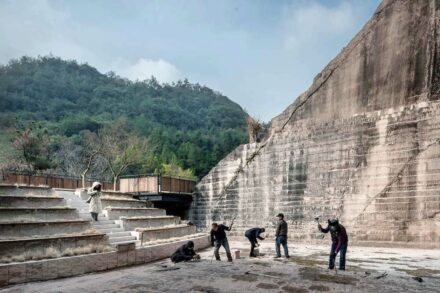 From platforms, visitors can watch the sunsets through a spectacular hole in the rock face.

For orientation, the 9 Quarry Trail is located in Jinyun County, Zhejiang Province, not far from Xianju National Park, famous for its bizarre volcanic rocks and the Temple of the Yellow Emperor. The Eurasia and Pacific continental plates collide in the region. The starting point of the current landscape was created about 120 million years ago. 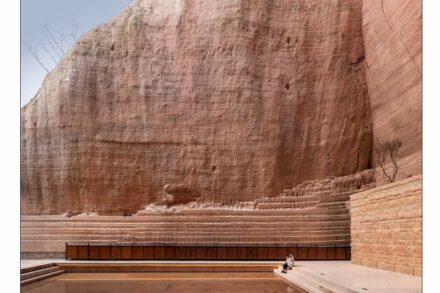 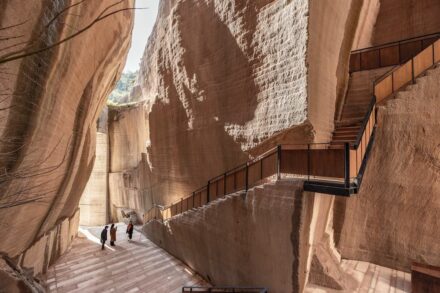 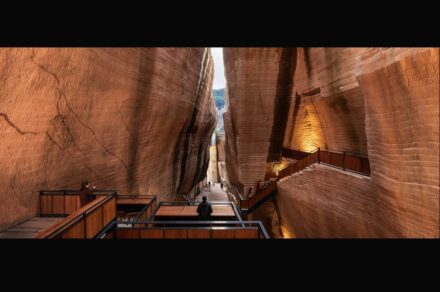