At the Grande Arche de la Défense in Paris, Carrara marble façade panels were replaced with Bethel White granite from the US 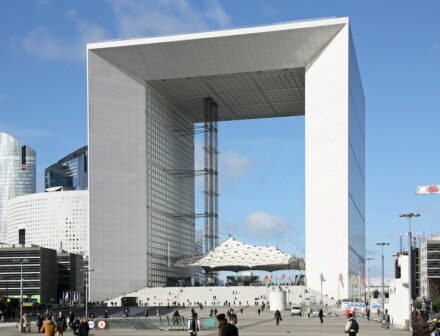 It’s bad news for the marble companies in Carrara, but good news for the natural stone industry worldwide: at the Grande Arche de la Défense in Paris, damage to the inner facade has been repaired by replacing Italian marble with Bethel White granite from the US State of Vermont. There was a danger here that an iconic work of modern architecture would in future bear a façade made of artificial stone, for example. So, the project bore global significance for the natural stone world.

In fact: the white of Bethel White cannot be distinguished from marble even from a few steps distance. So, its surface was flamed and brushed. Of course, from very close up you can see that this stone does not have the milky surface of Carrara marble, but instead carries the many minuscule dots of granite. But the owners and the many people involved were satisfied with the overall impression, which now corresponds to the original from 1989. 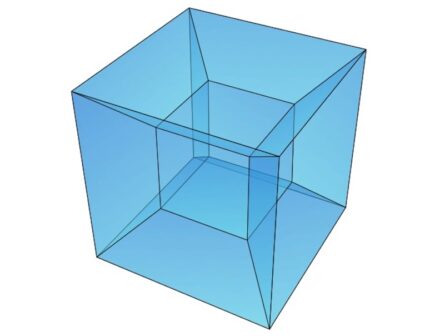 Before we continue, here is a verbal graphic of the architecture, so that you can imagine the whole thing. The Grande Arche is a (not quite perfect) cube, which has a smaller cube cut-out at its core. Sloping facade surfaces connect both bodies with each other. The technical term for this geometric figure is tesseract; it is also called a four-dimensional hypercube. 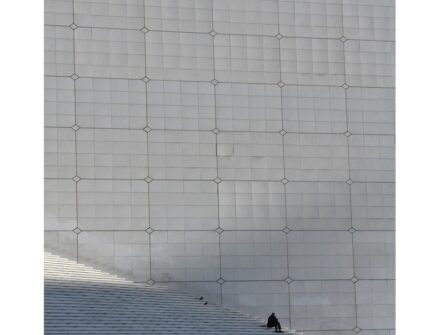 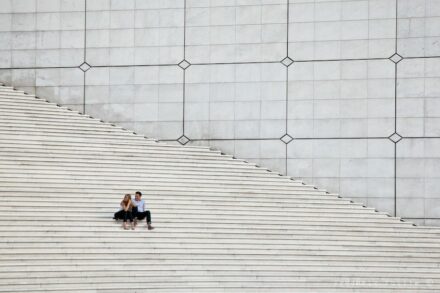 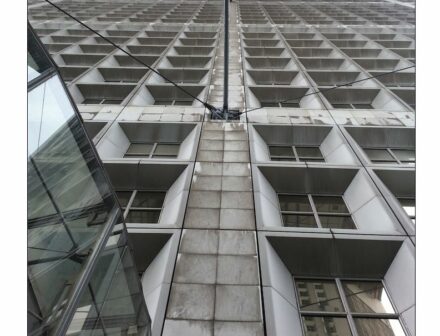 The history of the problem: only a few years after its completion in 1989, the issues with the marble façade began. The temperature fluctuations and automobile fumes had quickly affected the porous stone: it showed cracks and flaking, numerous slabs had bulged, and some had even come loose from their anchoring.

Such problems were not new. “Pillowing” had become the technical term for the bulging of marble that was observed in many places.

The Parisian architectural office Valode & Pistre was in charge of the entire project.

As is usual with such projects, the effort involved in selecting the replacement stones was considerable. We describe some of the steps using the example of the north side. 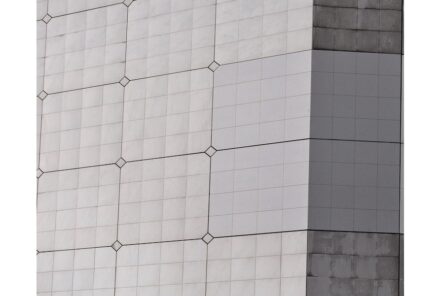 On several occasions, the architects and those involved met at the quarry of the Canadian supplier Polycor in Vermont and selected the suitable blocks. These were shipped in containers to the Spanish port of Vigo, and from there by truck to Levantina’s factory in O Porriño not far away.

There the company had the capacity needed for such a project to process the stone with the required accuracy.

One of the architects’ requirements was that the joints between the stone slabs on the façade should later be absolutely straight. This accuracy also had to be guaranteed for the drill holes for the later fixings.

The same applied to flaming and brushing.

The bundles with the slabs were transported by truck to Paris. As usual, a rigid schedule for delivery had to be adhered to.

The attachment to the facade was done with undercut anchors from the German company Fischer. The expansion pressure-free fixing (FZP-II) made it possible to use thinner and larger panels than with edge fixings.

In the future it will be much easier to replace plates than before. 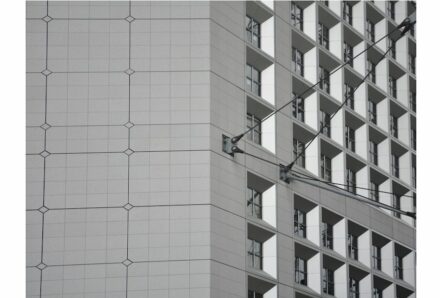 Plates with individual, clearly visible black dots were reworked. In this context, it was decided that a detailed inspection of the façade should be carried out on all 7 floors.

Ivan Pichel, European Manager at Levantina says: “A curtain wall with correctly installed granite is for life. Even after 30 years you just wash off the dirt and it’s as good as new.”

The project was awarded one of the Pinnacle Awards 2019. In its statement, the jury indicated the great importance of the project: It “was encouraged that natural stone was chosen,” it said, and: “It is very compelling that the monolithic, heavenly nature of the arch with the original Carrara marble was still possible to achieve with the Bethel White granite.”

It is suggested here that the stone industry worldwide should concentrate much more on the variety of the stone types and their diverse properties in order to counter artificial stone.

As a result of the Grande-Arche-Project: it does not always have to be ceramic or engineered stone if the architect wants to achieve the effect of white marble, but marble cannot be used – the effect can also be achieved with granite, for example.

A symbol of modern and historically aware France

In 1982, French President François Mitterand launched an international architectural competition to highlight and complete the central axis through Paris with a monumental building in the new La Défense district. The Dane Johan Otto von Spreckelsen won the competition with his cube, which was open and thus symbolically left a view into the future. The central axis now runs from the Louvre via the Place de La Concorde and the Arc de Triomphe to the new Grande Arche in La Défense.

But the cube is not quite perfect: it is 110 m high, but only 106 m wide (the empty inner cube measures 90 m by 70 m). It is also slightly out of alignment. This was necessary to be able to place the 12 foundation piers between the railway lines and roads underground. Von Spreckelsen turned this necessity into a magnificent gesture of respect for the city’s history: the 6.5° rotation of the Grande Arche corresponds exactly to the rotation in which, at the beginning of the axis, the inner courtyard of the Louvre is also pivoted.

La Grande Arche was inaugurated in 1989, to celebrate the 200th anniversary of the French Revolution.