Peter‘s Corner: Marmomac is once again off the mark with its icon for the advertising campaign, this time the digital editing of Canova’s sculpture “Pace“ (Peace) 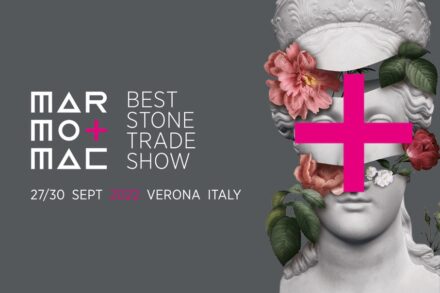 Update: Marmomac has kindly pointed out an error in our text: the female bust “Pace“ is not part of that homonymous sculpture in the museum in Kyiv, but one of the works from the series “Ideal Heads“ (Teste Ideali), which Canova had created for his closest friends and patrons after the Napoleonic Wars. The 6 busts are considered his most personal works and an expression of his highest ideal of beauty. We apologize for our inaccuracy. Photo of the bust

The responsible at Veronafiere don’t have a happy hand choosing icons for their promotion of Marmomac. If in 2021, the decision was simply clumsy and childish to choose Teddy Boy as an image in all advertising for the natural stone fair, the 2022 digital editing of the face of the marble sculpture “Pace“ (Peace) is wide off the mark. The original work is by sculptor Antonio Canova (1757-1822), whose 200th death anniversary is this year.

One has to ask: What does the digital editor want to tell us by cutting the face into 3 parts? Did he want to make room for the flowers that somehow seem to emerge from the object? Why flowers and rose leaves?

And: by cutting out the eye area, the face gets the expression of a mask, as known from antique warrior statues.

Finally, the + (which is an important sign of Marmomac since its renaming from Marmomacc to Marmo+Mac): An example: would it be acceptable if Fiat attached the logo of its car brand to Michelangelo’s David?

But it is more than a question of respect

Because whoever in these times makes peace a topic always is in reference to Russia‘s current war against Ukraine, intentionally or unintentionally.

The original of Canova’s “Pace“ is in the National Museum in Kyiv, where it currently needs special protection from the Russian attackers‘ bombs. 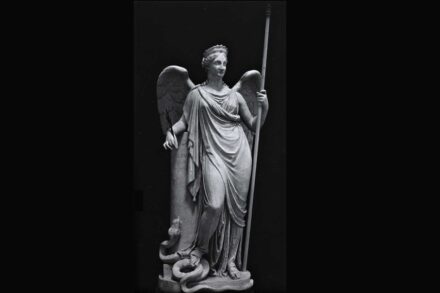 The story of this marble sculpture is also about war, at that time: about an attack on Russia.

In 1812, when the Russian politician and diplomat Nikolay Petrovič Rumyancev commissioned Canova to create the peace statue, an attack by Napoleon against the czardom was in the air. France’s emperor was gathering a massive army of an estimated half a million people and enlisting his allies to join in.

In a letter in February 1812, Canova wrote analogously: My statue will not stop the war, but I will create such a work, even if it has to be at my expense.

It is an allegory in the form of a woman with angel wings. In 1802 Canova still had accepted Napoleon’s commission to portray him as a peacemaker.

In June 1812, the emperor deployed his troops against Russia.

After the death of diplomat Nikolay Petrovič Rumyancev, his art collection with Canova’s “Pace“ went as a gift to the Russian Empire and was exhibited first in St. Petersburg and later in Moscow. Nikita Khrushchev donated it to the Khanenko National Museum in Kyiv in 1953.

An exhibition in Florence at the Museo Novecento shows how to deal with Canova’s sculpture. There, a plaster cast of the figure is juxtaposed with some warlike figures from the Medici collection. The title of the exhibition is “Art Wins Over War.“ We got our information about the history of the work from their webpage, where also the original’s copy is shown.

Y the way: Canova created numerous other works that document his mastership in sculpting with marble.