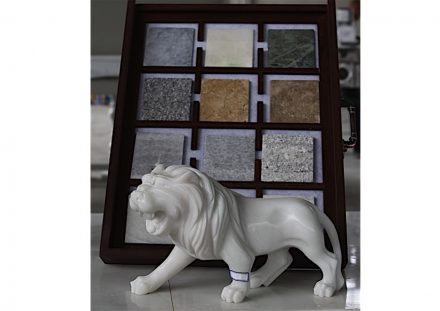 (September 2011) Afghanistan’s marble already enjoys the highest possible seal of distinction: „exclusive to the point of competing with Carrara“, according to a recent newsletter from the Italian Apuo Versilia region, where Carrara is situated. The comment originated from a report that Italian heavy machinery was busy working marble blocks close to where Italian troupes are stationed.

Recently, Afghanistan has been making a concerted effort to further the country’s natural stone industry. After all, the country, albeit ravaged by a series of wars, possesses considerable reserves. „The marble industry is a significant source of national pride for Afghans, and it offers an opportunity for employment growth“, according to a U.S. American government website.

The third Afghanistan International Marble Conference was the most recent step undertaken in a series to further the branch in Afghanistan. The Conference took place under the auspices of the Kabul Government supported by the United States Agency for International Development (USAID), and the Italian embassy. 200 experts and buyers from China, India, Iran, Italy, Turkey and Turkmenistan participated.

It was the third Afghan conference for natural stone and this time it was held in the provincial capital Herat, where the Afghan-American brothers Nasim and Adam Doost opened a marble quarry under the cloak of their equity capital mining. With the help of USAID six million US $ were invested. In the near future Gaspari Menotti gang saws will be producing 2 million tons of superior quality marble per annum destined for markets around the world. This, in turn, will directly create some 140 jobs locally and up to 500 more indirectly.

The production site is a quantum leap for Afghanistan’s natural stone market. Up until now exports were limited to raw block stone to China, India, Pakistan and Turkmenistan whereby value added products were often re-imported e.g. for building hotels in the capital Kabul.

Quarries in Afghanistan also lagged behind considerably from a technical point of view. One segment of the conference was dedicated to qualification of craftsmen.

Afghanistan looks back on a long history of stone export. For centuries Afghanistan has been famous for its semi-precious lapis lazuli, often used to symbolize heaven in altarpieces, and very costly.

It is estimated that some 100 types of marble alone count to the country’s natural stone reserves. Chesht and Khogiani marble are among the superior quality types. „In 10 years the industry could be close to producing $700 million in exports, equal to more than 6 percent of current GDP“ according to a Reuters news report quoting Paul Lamoureux, a USAID consultant.

But the path may prove to be a rocky one: apart from the country’s inherent security challenges and lack of qualified craftsmen, Afghanistan’s fledgling industry faces poor transportation and a general lack of infrastructure. But according to Reuters’ dispatch, the cloud has a silver lining – hope of less red-tape and corruption comes with a cabinet shuffle which took place earlier this year bringing with it the appointment of a new minister.