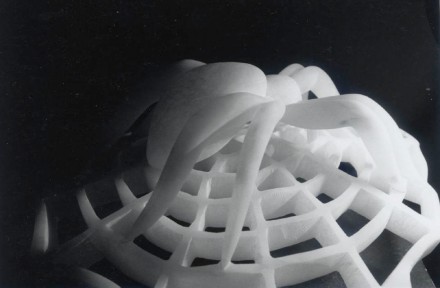 (November 2011) A spider in its web made of stone – can this be realized? Marion Rivière of France demonstrates the feasibility in alabaster. In her stone sculptures she often perpetuates a snap-shot from nature, where a small animal stops for a moment to look at the beholder and skitter away immediately thereafter. The visual and acoustic repercussions are what the artist captures in stone or bronze – undisturbed by the mere allusion to the hedgehog’s prickly coat or the polar bear’s coat turned sleek.

Marion Rivière studied biology but already during her studies began sculpting from colleagues who posed as models. A newspaper quotes the artist: „I can’t express myself but when I started to work in stone, my sculptures came alive. “

She went to Carrara to complete a course on sculpting in stone, and remained there for the next 9 years where she worked in various ateliers. Some of her motives show people under the motto: „L’homme cet animal“ („Man the animal“).

Two years ago she settled in Capcir a plateau at the edge of the Pyrinees endearingly referred to as little-Canada or little-Siberia. For the artist in her mid-thirties this was a circle coming full turn: this is where she spent her vacations as a child at her grandmother’s farm.